Where do the “Stone Age” and the time of Jesus meet without the aid of a space-time wormhole? At the Galilean site of ‘Einot Amitai near Nazareth in northern Israel, where archaeologists have discovered a 2,000-year-old quarry and workshop that produced chalkstone vessels. 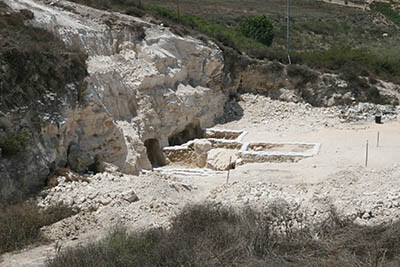 An excavation at a cave in Galilee has uncovered what may be a 2,000-year-old stone vessel production center. In the first century C.E., Jews commonly used stone vessels in observance of Jewish purity laws. Photo: Courtesy Yonatan Adler.

“Stone vessels played an integral role in the daily religious lives of Jews during [the first century C.E.],” explained archaeologist Yonatan Adler, Senior Lecturer at Ariel University, in a press release. “It was a Jewish ‘Stone Age’ of sorts.”

Adler and Dennis Mizzi, Senior Lecturer at the University of Malta, are codirectors of the excavation at ‘Einot Amitai, a project funded by the Israel Science Foundation, Ariel University and the Biblical Archaeology Society. (Read more about the project in Hershel Shanks’s First Person column in the forthcoming September/October 2016 issue of Biblical Archaeology Review.) 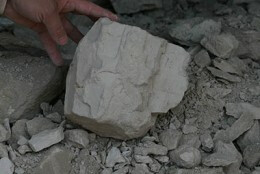 Located on the western slopes of Har Yonah near Nazareth, ‘Einot Amitai features a massive cave hewn into a chalkstone hill. The archaeologists discovered in their inaugural excavation season this summer chalkstone vessels at different stages of production, suggesting that the cave functioned as a workshop.

While vessels—from tableware to cooking pots to storage jars—were usually made of clay in antiquity, Jews throughout Judea and Galilee in the first century C.E. used vessels made of stone.

What was it that connected these stone vessels to Jewish purity laws? Simply this: Stone vessels, unlike ceramic and glass vessels, were not subject to impurity.

Laws of ritual purity and impurity are of Biblical origin (Leviticus 11:33 ff.). During the Second Temple period, however, the rules were greatly expanded. Most of the purity laws relate to rites in the Temple. But the territory of the Temple was at least metaphorically expanded beyond the Temple confines, and ritual cleanliness was not limited to the bounds of the Temple but spread through the Jewish community. The laws affected ordinary people.

It made sense to purchase a vessel that could not become unclean, for once a vessel became ritually unclean, it had to be taken out of use. An impure pottery vessel, for example, had to be broken.

The Galilee is one of the most evocative locales in the New Testament—the area where Jesus was raised and where many of the Apostles came from. Our free eBook The Galilee Jesus Knew focuses on several aspects of Galilee: how Jewish the area was in Jesus’ time, the ports and the fishing industry that were so central to the region, and several sites where Jesus likely stayed and preached.

Yonatan Adler draws a connection between the ritual use of stone vessels and the story of the wedding in Cana of Galilee—where Jesus performed his first miracle—in the Gospel of John. In the story, when the wedding party ran out of wine, Jesus turned water held in six stone jars into wine (John 2:1–11). The Gospel of John alludes to the Jewish custom of using stone vessels:

“Nearby stood six stone water jars, the kind used by the Jews for ceremonial washing, each holding from twenty to thirty gallons” (John 2:6).

Adler, furthermore, notes that the chalkstone cave at ‘Einot Amitai is located just south of the town of Kafr Kanna, identified by some scholars as Cana in the Bible. Another candidate for Biblical Cana is Khirbet Cana (“the ruins of Cana”), located four miles northwest of Kafr Kanna in Galilee.

“It is certainly possible—perhaps even likely—that large stone containers of the type mentioned in the Wedding at Cana story may have been produced locally in Galilee in a cave similar to the one we are now excavating,” Adler said.

‘Einot Amitai codirector Dennis Mizzi, however, cautions that thus far the excavation has only found small vessels—mugs and bowls.

“Fragments of large jars have not been unearthed,” he explained.

Nonetheless, the discoveries in this first intensive excavation season at ‘Einot Amitai are promising. The Ariel University press release describes the significance of the investigation:

“While fragments of stone vessels have been found in the past at numerous Early Roman period sites throughout Israel, and two workshops are known from the Jerusalem area, this is the first time that full-scale excavations [have been] conducted at a stone vessel production site in Galilee.”