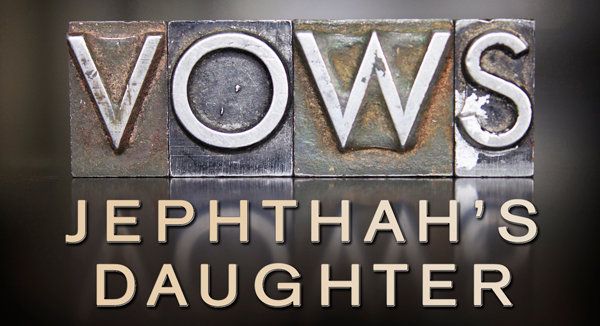 Was Jephthah’s daughter a human sacrifice? In reading of Judges 11, we find the story of Jephthah and his promise to the Father to sacrifice the next thing that came from his doors to meet him. Why would the Father honor such a vow of killing one’s own daughter when YHWH is so vehemently against child sacrifice as illustrated numerous times throughout Scripture? Is there a chance that we’ve missed something here?

Let’s start by examining the vow a bit.

Judges 11:30-31
And Jephthah made a vow to YHWH and said, “If you will give the Ammonites intomy hand, then whatever comes out from the doors of my house to meet me when I return in peace from the Ammonites shall be YHWH's, and I will offer it up for a burnt offering.”

The vow Jephthah made was for whomever, or whatever, came through this gates. So we know this could be a person or a beast of some sort. What may be missed is the conjunction “and” at the end of verse 31. The word used for “and” is a connective particle in the Hebrew and often is translated as “or” or “nor” throughout many other places in Scripture. This changes the vow in an important way; instead of whatever coming out the door to meet him being dedicated to YHWH AND offered up as a burnt offering, we find it as an “or”. This means Jephthah was dedicating whomever came out to YHWH or whatever came out as a burnt offering. We know only specific things can be burnt offerings; people are not among them.

The text suggests that his daughter went out and wept for her virginity. Why would she weep for her virginity instead of her life if she was to be burned as an offering to YHWH? Could it be that she was not to die? If she is not going to die, then there are two options left, she is either redeemed as a first born redeemed despite being a daughter, or she would live a set apart life, wholly devoted to the Creator and never marry or know a man. This seems to be the likelier of the two options based upon what we know, but either would be sufficient to save her life. He was never worried about killing his daughter, but with her dedication to the Creator, his line would come to an end as she would not have children; she was his only child. While paying a redemption price would save his daughter’s life, it would not account for his great sense of loss and sadness.

Dedicating his daughter wholly to YHWH, however, this explains both why the daughter and the father were upset; one has his line ended and the other would never be able to raise a family, both were of great value in the culture of the day. There is no concrete evidence either way, but the sacrifice of the daughter via burnt offering does not work with the rest of Scripture, thus an alternative must have existed.

We hope that this has blessed you and given you cause to dig deeper than just the surface of the Word while continuing to test everything.