What do you call a team of Yale Egyptologists who just discovered the oldest known monumental Egyptian hieroglyphs? “Absolutely flabbergasted,” according to Professor John Coleman Darnell, codirector of the Elkab Desert Survey Project.

As reported by YaleNews, Darnell and his team came across the hieroglyphs during their study of road networks around the ancient Egyptian city of Nekheb (modern Elkab) on the east bank of the Nile. At the site of El-Khawy, about four miles north of Elkab, they discovered two sets of ancient carvings: a section of rock art portraying a herd of elephants (dated c. 4000–3500 B.C.E.) and a large hieroglyphic panel containing four signs (c. 3250 B.C.E.). These inscriptions excited Darnell and his team because of their monumental size, their symbolism and their impact on our knowledge of ancient Egyptian writing and culture.

Each symbol is roughly 20 inches tall. This is massive in comparison to the other early Egyptian inscriptions known to us, which are usually only 1 to 2 centimeters high.

“In the modern world, this would be akin to seeing smaller text on your computer screen and then suddenly seeing very large ones made the same way, only on a billboard,” Darnell said in YaleNews.This monumental inscription is located in the desert region of Elkab, just across the Nile River from Hierakonpolis, another important city of pre- and early dynastic Egypt. 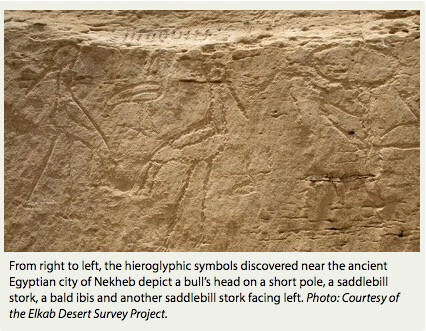 “The signs of the inscription appear to equate royal authority (the bull’s head on a pole) with solar power (the back-to-back storks),” explained Darnell in an email to Bible History Daily. Because Elkab was located at a crossroads for the mineral trade, “a statement of royal authority in the area would be appropriate.”

“This newly discovered rock art site of El-Khawy preserves some of the earliest—and largest—signs from the formative stages of the hieroglyphic script and provides evidence for how the ancient Egyptians invented their unique writing system,” Darnell told YaleNews.

Read more stories like this at Bible History Daily