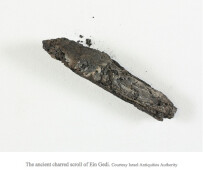 A new digital analysis of the extremely fragile Ein Gedi scroll — the oldest Pentateuchal scroll in Hebrew outside of the Dead Sea Scrolls — reveals the ink-based writing hidden on its untouchable, disintegrating sheets, without ever opening it. While prior research has successfully identified text within ancient artifacts, the Ein Gedi manuscript represents the first severely damaged, animal skin-based scroll to be virtually unrolled and non-invasively read line by line. The series of digitization techniques employed by William Brent Seales of the University of Kentucky and colleagues demonstrates that it is possible to “see” ink-based text within an extremely fragile scroll while avoiding the need for physical handling. The traditional approach of unrolling a scroll and pressing it flat in order to duplicate text is not an option for splintering manuscripts like the Ein Gedi scroll, which has been burned and crushed into lumps of charcoal. Seales, along with a team of researchers, began by performing a volumetric scan of the scroll using X-ray microtomography, followed by segmentation, which digitally creates a “page” containing the writing. The team pieced together over 100 such scanned segments of the scroll by hand. Further manipulation of the digitized scroll involved using texturing and flattening techniques, and finally, virtual unwrapping to unveil the text written on its pages. At last, the authors were able to “see” the text on five complete wraps of the Ein Gedi scroll, and the resulting image is one of two distinct columns of Hebrew writing that contain legible and countable lines, words, letters, and spacing. Further analysis revealed the scroll’s writings to be the book of Leviticus, which makes it the earliest copy of a Pentateuchal book ever found in a synagogue’s Holy Ark. This virtual unlocking of the Ein Gedi scroll paves the way for further scholarly analysis of this and other text buried in delicate, damaged materials. 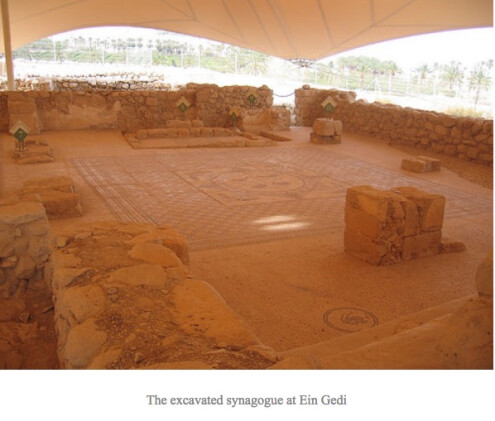 The Israel Antiquities Authority worked with scientists from Merkel Technologies, Ltd. in Israel, to conduct high resolution 3D scanning of Dead Sea Scrolls fragments and phylactery (tefillin) case using the Bruker Skyscan model 1176 Micro-CT scanner. The fragment of the extensively burned and damaged Ein Gedi scroll was also scanned, after which the scan results were sent to Professor Seales, who had developed a digital imaging software which allowed scientists to virtually "unroll" the scroll and "see" the text. This revealed lines of the first 8 verses of the Book of Leviticus, as follows:

“The LORD summoned Moses and spoke to him from the tent of meeting, saying: Speak to the people of Israel and say to them: When any of you bring an offering of livestock to the LORD, you shall bring your offering from the herd or from the flock. If the offering is a burnt-offering from the herd, you shall offer a male without blemish; you shall bring it to the entrance of the tent of meeting, for acceptance in your behalf before the LORD. You shall lay your hand on the head of the burnt-offering, and it shall be acceptable in your behalf as atonement for you. The bull shall be slaughtered before the LORD; and Aaron’s sons the priests shall offer the blood, dashing the blood against all sides of the altar that is at the entrance of the tent of meeting. The burnt-offering shall be flayed and cut up into its parts. The sons of the priest Aaron shall put fire on the altar and arrange wood on the fire.Aaron’s sons the priests shall arrange the parts, with the head and the suet, on the wood that is on the fire on the altar. (Leviticus 1:1-8).

According to Dr. Sefi Porath, discoverer of the scroll in the 1970 Ein Gedi excavations, "The deciphering of the scroll, which was a puzzle for us for 45 years, is very exciting. Ein Gedi was a Jewish village [located near the west coast of the Dead Sea] in the Byzantine period (fourth–seventh century CE) and had a synagogue with an exquisite mosaic floor and a Holy Ark. The settlement was completely burnt to the ground, and none of its inhabitants ever returned to reside there again, or to pick through the ruins in order to salvage valuable property. In the archaeological excavations of the burnt synagogue, we found in addition to the charred scroll fragments, a bronze seven-branched candelabrum (menorah), the community’s money box containing c. 3,500 coins, glass and ceramic oil lamps, and vessels that held perfume. We have no information regarding the cause of the fire, but speculation about the destruction ranges from Bedouin raiders from the region east of the Dead Sea to conflicts with the Byzantine government.” 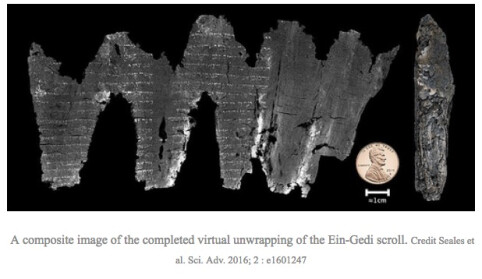 The date of the Ein-Gedi scroll is still uncertain. Carbon-14 dating suggests that the scroll was created around 300 CE. However, the ancient script style suggests a date arund 100 CE, according to Ada Yardeni, an authoritative expert on Hebrew paleography.

In addition to the decipherment of the heavily charred ancient Hebrew scroll, it also confirms the first time a Torah scroll was ever found in a synagogue inside a Holy Ark in an archaeological excavation.

Sources: Adapted and edited from news releases of the American Association for the Advancement of Science and the Israel Antiquties Authority.