A few years ago, a team of archaeologists cleaning sand from an ancient Egyptian tomb discovered a group of broken jars, one of them containing a mysterious white substance.

The team had guesses as to what the material might be, but a new analysis published in the journal Analytical Chemistry offers an answer: What they found during that excavation was an approximately 3,200-year-old piece of cheese, one of the oldest solid specimens discovered.

“The archaeologists suspected it was food, according to the conservation method and the position of the finding inside the tomb, but we discovered it was cheese after the first tests,” Enrico Greco, the lead author of the paper and a research assistant at Peking University in Beijing, said in an email. 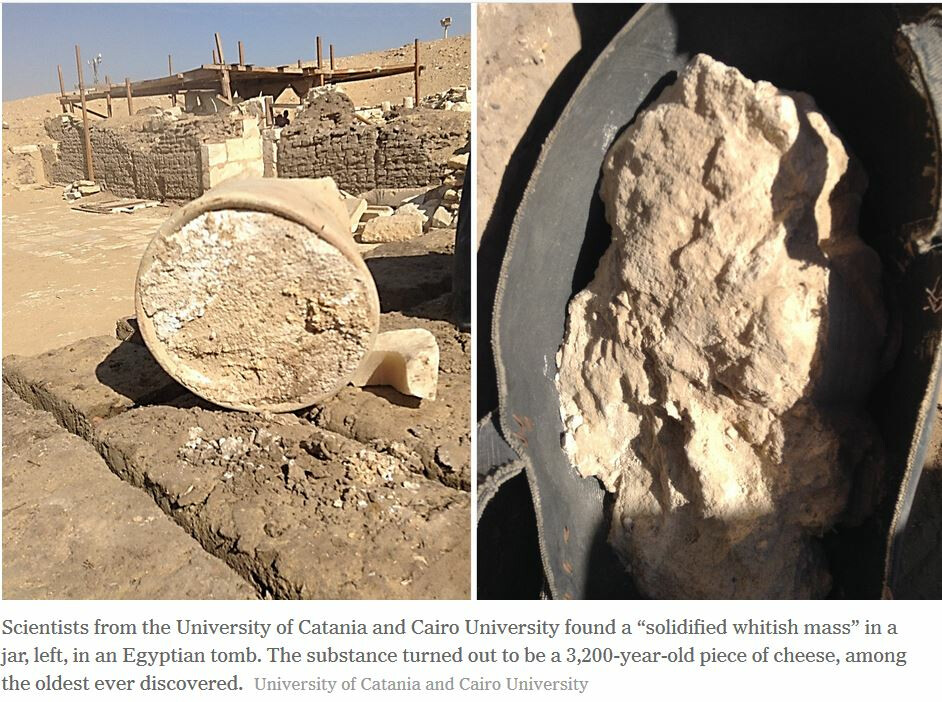 The tomb in which the cheese was found belonged to Ptahmes, a high-ranking Egyptian official in the 13th century B.C. and the former mayor of the ancient city of Memphis, according to the paper. His burial site was first unearthed in 1885, but was lost to shifting sands until its rediscovery in 2010.

The ancient cheese, which was sometimes included in the feasts buried alongside wealthy Egyptians, was probably similar in consistency to chevre, but with a “really, really acidy” bite, according to Paul Kindstedt, a professor at the University of Vermont who studies the chemistry and history of cheese.

“It would be high in moisture; it would be spreadable,” he said. “It would not last long; it would spoil very quickly.”

In fact, in 1942, a team of researchers reported a finding not dissimilar to that of Dr. Greco and his colleagues, Dr. Kindstedt pointed out. In a journal article, they described finding a substance in ancient Egyptian jars that they suspected to be cheese dating back to 3200 B.C. The samples, they wrote, had “no smell and only a dusty taste.”

But even if the cheese Dr. Greco tested isn’t the oldest ever found, the findings stand out for another reason: the application of a state-of-the-art protein analysis.

“As I say to my students every year when I get to Egypt, someone has to go ahead and analyze these residues with modern capabilities,” said Dr. Kindstedt, who added that he plans to use Dr. Greco’s paper in his teachings this fall. “This is a logical next step and I think you’re going to see a lot more of this.”

In their analysis, Dr. Greco and his colleagues found hundreds of peptides, or chains of amino acids. Most were human and represented skin and saliva contamination, but, crucially, nine were linked to bovine or ovine milk.

Adventurous eaters be warned: The cheese may not be cursed, but the analysis found evidence of a bacteria that causes brucellosis, an infectious disease that can cause fevers, headaches, muscle pain and other symptoms that can reoccur or never go away at all.

And while the sample retrieved by Dr. Greco’s colleagues may be old, others have discovered traces of ancient cheese or yogurt (the two can be difficult to distinguish) that long predate even the recent finding, Dr. Kindstedt said.

“Other groups have done a lot of work with extracting lipid residues, fat residues, from ancient pots going back as far as 7000 B.C.,” he said.