Luxuries, like a bathtub, signal that the 2000-year old house being dug up in Mt. Zion, near Caiaphas' home, belonged to a member of the ruling class. 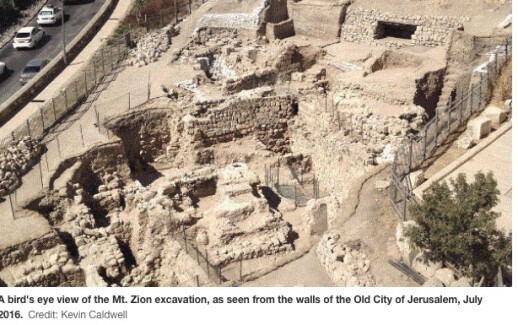 Archaeologists excavating in the heart of ancient Jerusalem have begun to uncover the neighborhood that housed the elite 2,000 years ago – most probably the priestly ruling class.

One of the houses had its own cistern, a mikveh (a Jewish ritual bathing pool), a barrel-vaulted ceiling and a chamber with three bread ovens.

Inside a room found with its ceiling intact was a bathtub – an extremely rare luxury that commoners of the time could not afford.

Bathtubs, as opposed to ritual dipping pools, have so far only been found at King Herod's palaces in Masada and Jericho, and in the so-called "Priestly Mansion" in the Jewish Quarter of the Old City of Jerusalem.

“It's clear from the finds that the people living here were wealthy, aristocrats or perhaps even priests,” Prof. Shimon Gibson, co-director of the excavations, told Haaretz. 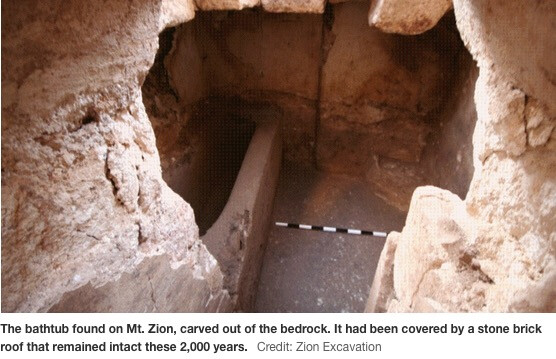 A ritual stone cup with a priestly inscription, used for purification rituals, also found there supports the archaeologist's theory that this area was the Priestly Quarter of ancient Jerusalem.

“Caiaphas' house has been located. It's up on the hill not far from our site," Gibson points out in additional support of the thesis.

“We know from pilgrim reports that Caiaphas’s house was in this area. The Armenian site is just up the hill from our site, the Roman Catholic site Peter Gallicanu is just below," Prof. James Tabor of the University of North Carolina at Charlotte told Haaretz. "Caiaphas was the son-in-law of Annas, who had six sons who where high priests. He ran the show for about 60 years putting his sons in one after the other, and his  son-in-law, Caiaphas along the way. So perhaps these are the homes of that extended priestly dynasty,” Tavor said.

The high priests at that time were notorious, with a reputation for being corrupt, brutal and greedy. We learn this not only from the Gospel accounts but from Talmudic texts telling how the high priest used to beat the people with sticks (Pesachim 57a, Pp.284-285). Josephus gives us a similarly grim account, coining the high priest a “hoarder of money” (Josephus - Antiquities of the Jews 20.9.2-4: "But as for the high priest, Ananias, he increased in glory every day, and this to a great degree, and had obtained the favor and esteem of the citizens in a signal manner; for he was a great hoarder up of money"). 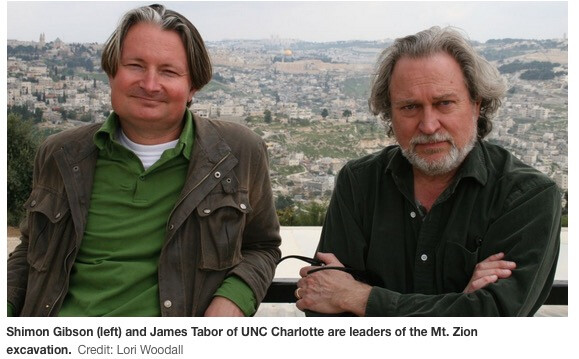 One highly unusual discovery is murex shells, 13 of them – the largest number ever found in the ruins of first-century Jerusalem.

Murex, a genus of Mediterranean sea snail, were highly valued in Roman times because of the rich purple and turquoise dye that could be extracted from the living creature. Since it is highly unlikely that live snails were brought from the coast to be "milked" in Jerusalem, Gibson postulates that the dye came from the coast in vials that were marked by shells.

“On the outside of the bottle containing dye they tied the shell so that you would know from which shell the dye was extracted. Like we put markers on our boxes today,” Gibson explains. 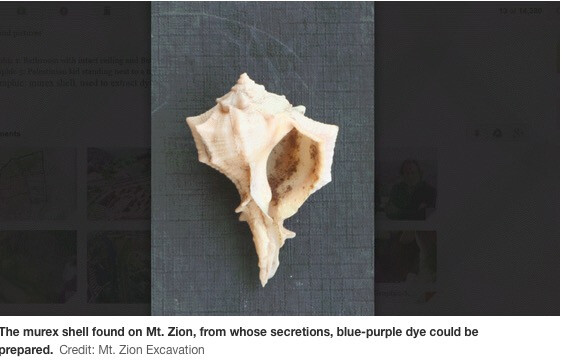 The location of the newly discovered quarters, right at the old city center immediately southeast of the palace of Herod the Great, supports the theory that these houses belonged to extremely prominent people.

Herod is famous for having rebuilt Jerusalem, profoundly reshaping the urban landscape. Most notable is the construction of his grand palace on the northern side of Mt Zion in 25 BCE.  It would be during this construction blitz that the new neighborhood now found would have gone up.

The extraordinarily grandiose buildings with towers, gates, barracks and magnificent gardens were all part of the Herodian propaganda endeavor. In fact, Gibson discovered that the floor level of Herod´s palace was higher than God's temple on the opposite hill, which made him speculate about Herod's perception of himself.

“It seems like Herod saw himself a bit higher then God,” the archaeologist observes. 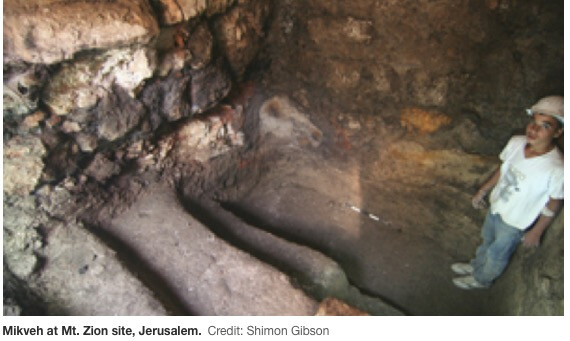 It bears noting that the neighborhood had been populated long before Herod entered the stage. Archaeological evidence of occupation dates back to the 8th century BCE, a time the city was expanding to the west, into Mount Zion. Remains of the city walls that were built around the new city as well as pottery from that earlier time been unearthed during previous excavations.

After the destruction of Jerusalem by the Babylonians in 587 B.C.E, the neighborhood was abandoned. When it was settled again is an open question.

Massive amounts of pottery dating to the 5th century BCE were found during the recent excavations, which has sparked some controversy. Some feel it to be evidence that the area was inhabited. Others say it's remnants – i.e., garbage.

Gibson remains more cautious. “The problems is that with so much rubbish, you have to imagine people living in the City of David coming up to Mount Zion to scatter their rubbish up there. It seems like it's a lot of hard work.”

Other discoveries are directly connected with the final hours of the Jewish rebellion against the Romans in year 70 CE.

At the bottom of the residence’s large, 9-meter deep cistern, the excavators found cooking pots and the remains of an oven.

“When we started clearing it we found a lot of debris inside, which included substantial numbers of animal bones and then right at the bottom we came across a number of vessels, which seemed to be sitting on the floor – cooking pots and bits of an oven as well,” Gibson said.

He speculates that these might be the remnants of a kitchen in use by Jews hiding from the Romans – their last resort was to go into these cisterns.

A certain John, a leader of the rebels, along with his brother Simon, were found starved to death in the cisterns and water systems that ran under the city, according to the Roman-Jewish historian Titus Flavius Josephus, Gibson points out. Over 2000 bodies were found in the various underground chambers, most dead from starvation (Josephus, War 6:429-433).