Ashes, Ashes, We All Fast Now 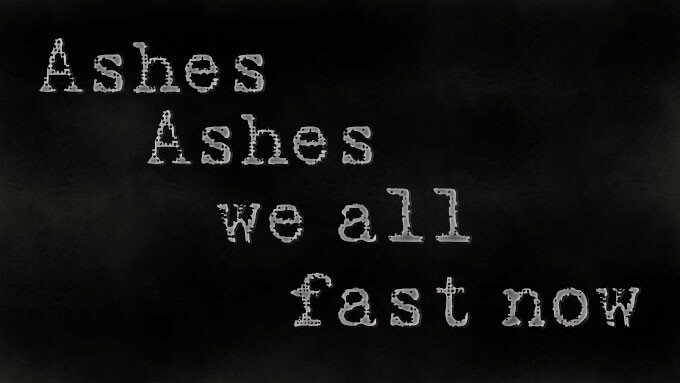 Yesterday was Ash Wednesday. For many, it’s the time when ashes are put on their foreheads to denote repentance, fasting, and that to dust we shall return. It also marks the beginning of lent, 40 days when they “fast”, or give up, something. Some believe this is only a Catholic practice, when in reality it is practiced by other Christian denominations as well including Lutherans, Methodists, and Presbyterians, among others.

Simple Truths
Catholics claim this about the practice (http://www.catholic.org/clife/lent/ashwed.php)
According to the canonical gospels of Matthew, Mark and Luke, Jesus Christ spent 40 days fasting in the desert, where he endured temptation by Satan.[2] Lent originated as a mirroring of this, fasting 40 days as preparation for Easter. Every Sunday was seen as a commemoration of the Sunday of Christ's resurrection and so as a feast day on which fasting was inappropriate. Accordingly, Christians fasted from Monday to Saturday (6 days) during 6 weeks and from Wednesday to Saturday (4 days) in the preceding week, thus making up the number of 40 days.[3]

Ash Wednesday derives its name from the practice of blessing ashes made from palm branches blessed on the previous year's Palm Sunday, and placing them on the heads of participants to the accompaniment of the words "Repent, and believe in the Gospel" or "Remember that you are dust, and to dust you shall return".

Lutherans have this belief (http://www.orlutheran.com/html/ash.html) :
Ash Wednesday, originally called dies cinerum (day of ashes) is mentioned in the earliest copies of the Gregorian Sacramentary, and probably dates from at least the 8th Century. One of the earliest descriptions of Ash Wednesday is found in the writings of the Anglo-Saxon abbot Aelfric (955-1020). In his Lives of the Saints, he writes, "We read in the books both in the Old Law and in the New that the men who repented of their sins bestrewed themselves with ashes and clothed their bodies with sackcloth. Now let us do this little at the beginning of our Lent that we strew ashes upon our heads to signify that we ought to repent of our sins during the Lenten fast." Aelfric then proceeds to tell the tale of a man who refused to go to church for the ashes and was accidentally killed several days later in a boar hunt! This quotation confirms what we know from other sources, that throughout the Middle Ages ashes were sprinkled on the head, rather than anointed on the forehead as in our day.

As Aelfric suggests, the pouring of ashes on one's body (and dressing in sackcloth, a very rough material) as an outer manifestation of inner repentance or mourning is an ancient practice. It is mentioned several times in the Old Testament. What is probably the earliest occurrence is found at the very end of the book of Job. Job, having been rebuked by God, confesses, "Therefore I despise myself and repent in dust and ashes" (Job 42:6). Other examples are found in 2 Samuel 13:19, Esther 4:1,3, Isaiah 61:3, Jeremiah 6:26, Ezekiel 27:30, and Daniel 9:3. In the New Testament, Jesus alludes to the practice in Matthew 11:21: "Woe to you, Korazin! Woe to you, Bethsaida! If the miracles that were performed in you had been performed in Tyre and Sidon, they would have repented long ago in sackcloth and ashes."

These reasons for the ashes and fasting appear to be pure and based on practices seen in Scripture. It’s important to note, however, that the practices being done today are not found in Scripture, anywhere. There is no place in Scripture, in Christ’s time, before, or after, that placing ashes upon one’s forehead is something to be done to signify anything. We do find that when some were in extreme mourning and repentance, they would don sackcloth and ashes to signify this. At times, fasting also accompanied this such as when David was sorrowful for the sin he had committed with Bathsheba.

The simple act of going before a priest, bishop, or other to have special ashes designated as holy is not found as something the Creator wants from us. We are given only one clarification regarding fasting, Matthew 6:16-18

Matthew 6:16-18
“When you fast, do not look somber as the hypocrites do, for they disfigure their faces to show men they are fasting. I tell you the truth, they have received their reward in full. 17 But when you fast, put oil on your head and wash your face, 18 so that it will not be obvious to men that you are fasting, but only to your Father, who is unseen; and your Father, who sees what is done in secret, will reward you.

Messiah tells us to look fresh and clean when fasting so that others will not know you are doing it. It must be noted that there are no commandments regarding fasting that tells us we are to do so in our everyday life throughout the year, nor is it considered a sin to NOT fast. The instructions Yeshua gives us are more about how we are to carry ourselves when fasting; we must keep ourselves humble, no outward expression should be apparent.

Many felt our graphic yesterday (see right) was “bashing” the Catholics 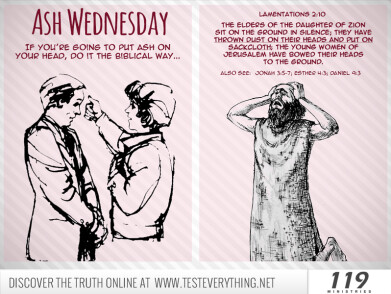 and being judgmental. In truth, this was never our intent. Our intent is to instruct; instead of practicing a man-made tradition, if we choose to be repentant and use ashes as an outward expression, then we should do it the way it was shown to us in Scripture. In truth, putting ashes on the forehead (a cross in modern times, two parallel lines or other symbols in ancient times) is not a practice that should be associated with the Father. The act of putting ashes above the brow has been occurring since ancient days, not as modern as the 3rd – 4th century; this was not a new concept to the early church fathers.

Other Gods?
Hindu - (http://www.saranam.com/cms/13/Hindu-Rituals.htm) :
Why do we apply the holy ash ?
The ash of any burnt object is not regarded as holy ash. Bhasma (the holy ash) is the ash from the homa (sacrificial fire) where special wood along with ghee and other herbs is offered as worship of the lord. Or the deity is worshipped by pouring ash as abhisheka and is then distributed as bhasma. Bhasma is generally applied on the forehead Some apply it on certain parts of the body like the upper arms, chest etc. Some ascetics rub it all over the body. Many consume a pinch of it each time they receive it.

Why do we do use bhasma ?
The word bhasma means, “that by which our sins are destroyed and the Lord is remembered” Bha implies bhartsanam (“to destroy’) and sma implies smaranam (“to remember”.) The application of bhasma therefore signifies destruction of the evil and remembrance of the divine. Bhasma is called vibbuti (which means “glory”) as it gives glory to one who applies it and raksha (which means a source of protection) as it protects the wearer from ill health and evil, by purifying him or her.

Homa (offering of oblations into the fire with sacred chants) signifies the offering or surrender of the ego and egocentric desire into the flame of knowledge or a noble and selfless cause. The consequent ash signifies the purity of the mind, which results from such actions. Also the fire of knowledge burns the oblation and wood signifying ignorance and inertia respectively. The ash we apply indicates that we should burn false identification with the body and become free of the limitations of birth and death. The application of ash reminds us that the body is perishable and shall one day be reduced to ashes. We should therefore not get too attached to it. Death can come at any moment and this awareness must increase our drive to make the best use of times. This is not to be misconstrued as a morose reminder of death but as a powerful pointer towards the fact that time and tide wait for none.

Bhasma is specially associated with Lord Shiva who applies it all over His body. Shiva devotees apply bhasma as a tripundra (the form of “=”). When applied with a red spot in the centre, the mark symbolizes Shiv – Shakti (the unity of energy and matter that creates the entire seen and unseen universe).

Ash is what remains when all the wood is burnt away and it does not decay. Similarly, the Lord is the imperishable Truth that remains when the entire creation of innumerable names and forms is dissolved.

Bhasma has medicinal value and is used in many ayurvedic medicines. It absorbs excess moisture from the body and prevents colds and headaches. The Upanishads say that the famous Mrityunjaya mantra should be chanted whilst applying ash on the forehead.

“We worship the three-eyed lord Shiva who nourishes and spreads fragrance in our lives. May He free us from the shackles of sorrow, change and death-effortlessly, like the fall of a ripe brinjal from its stem.”

Many say this also stems from Norse mythology, but we were unable to substantiate that claim or the claim indicating it comes from the Vedic Indians with their god Agni. Our point is this, other religions used this practice to worship their god(s) long before Christianity did; this seems to be a practice that comes straight from false god worship.  As such we should not use it to worship YHWH.

Deuteronomy 12:30
take care that you be not ensnared to follow them, after they have been destroyed before you, and that you do not inquire about their gods, saying, ‘How did these nations serve their gods?—that I also may do the same.’

Again...
“do not inquire about their gods, saying, ‘How did these nations serve their gods? – that I also may do the same”

It’s clear our Creator does not want us to follow any of the practices other nations used to honor or worship their gods, even if we are applying them to Him. If He doesn’t want us to do it, then why would we want to? Does our will matter? Does His will matter? Choose today whom you will serve, man’s ways, or Yah’s ways.

We want to be very clear, we are not being judgmental, anti-Catholic, Lutheran, or any other denomination who follows these practices.  We are simply testing these practices against the Word of Elohim.  We desire that all shall see the truth of His Word and choose to obey it over any man's tradition or doctrine.