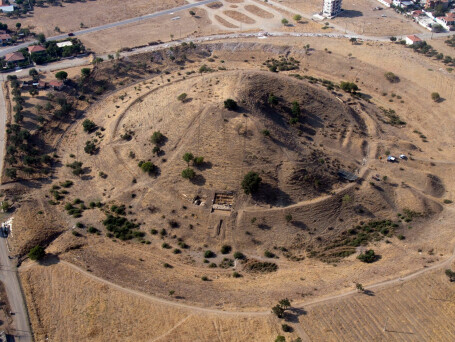 The long-lost burial site of the Attalid Dynasty, which ruled the city of Pergamon after Alexander the Great, may have been identified. A vast mound first excavated almost 200 years ago in western Turkey is the spot, Prof. Felix Pirson thinks – and hopes to prove it soon using advanced technologies.

Certainly, the monumental burial site at Yiğma Tepe, atop a hill by Pergamon (today Bergama) had to have been created to commemorate somebody vastly important.

"What points to the Attalids is the monumental size and indications for dating in the 2nd century BCE," Pirson, director of the Pergamon excavation projects, told Haaretz.

Beyond its sheer dimensions, the architecture and the alignment of the tomb, to the western side of the Temple of Athena and stairway side of the Great Altar, also support the theory that it was the tomb of a great Attalid ruler, Pirson says.

Royal palaces, but where are the kings?

The Hellenistic kings of Pergamon ruled over most of minor Asia during 2nd century BCE. The gorgeous Attalid royal capital, deliberately built with extravagant aesthetics to awe, was the embodiment of the kingdom's wealth and power.

Pergamon began as a fortress atop an isolated hill between two rivers. 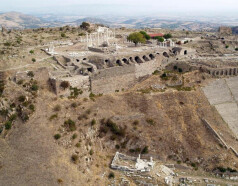 Pliny the Elder even credits the city with inventing the use of leather as parchment, after jealous Ptolemaic rulers banned the export of papyrus to Pergamon because they feared the royal library, built by King Eumenes II (who ruled between 197-159 BCE), was about to surpass their own in Alexandria. The city lasted into the Byzantine era: on the north slope of the hill, archaeologists have found spearheads, coins and ceramics from that time.

All along, however, the burial mounds at the foot of the mountain were a strong possibility.

Yiğma Tepe, which is 158 meters in diameter and 31 meters high, and dominates the Kaikos plain to the south of Pergamon the burial mound was investigated by the early archaeologist Alexander Conze in 1878 – then, the site was at the edge of the modern town of Bergama.

The excavators found that the mound was contained by a peripheral wall (krepis) built of big andesite blocks, but no entrance way to the interior was found in this platform from where the superstructure once rose. Despite intensive digging, which left behind the deep groove in the mound, they never found the burial chamber.

Pirson is hopeful that this season's investigation, with geophysical and seismic prospection, will bring new information about the inner structure and the building process of this monumental tumulus.

Another magnificent burial that has been excavated sits on the saddle of the İliyas Tepe (St. Elias Hill), to the east of the acropolis mountain. It belonged to an unknown man of grand stature. A tunnel built of ashlar blocks lead to a 2,200-year-old barrel-vault chamber, sealed off by a double-winged stone door that was equipped with a complex locking mechanism of bronze. Neither the massive stone doors nor the locking device was enough to stop grave robbers from stripping the tomb of its treasures.

The looters did leave left behind the skeletal remains of a man, aged 60-75, inside a sarcophagus. Thanks to an unguentarium found in the sarcophagus, a bottle frequently found in Hellenistic and Roman sites, the man's funerary monument could be dated to the second half of the 3rd century BCE, to the reign of Attalos (241-197 BCE).

The archaeologists believe the deceased was part of the Attalos family's most inner circle, perhaps a general.

Dörpfeld had also found two other burial mounds on the Kaikos plain, from an earlier era. These two burials, which had been left undisturbed by thieves, are also of the tumulus type, about 30 meters in diameter and date to the mid-3rd century BCE, the era of Eumenes I (who ruled from 263-241 BCE). Each contained a single sarcophagus, and one contained particularly rich "grave goods" - including a golden oak-leaf wreath with Herakles knot (that rested on the deceased's head), a Nike pendant, two heads of Molosser dogs made of gold, iron weapons, and a coin bearing the image of Alexander the Great. Next to it was another coin, "Charon's obol"– a coin that was placed with the dead as a fare for the journey to the underworld.

Who had been buried there however is anybody's guess but the burial custom displays links with Macedonia.

For so much more of this article please read the rest of the story at Haaretz.