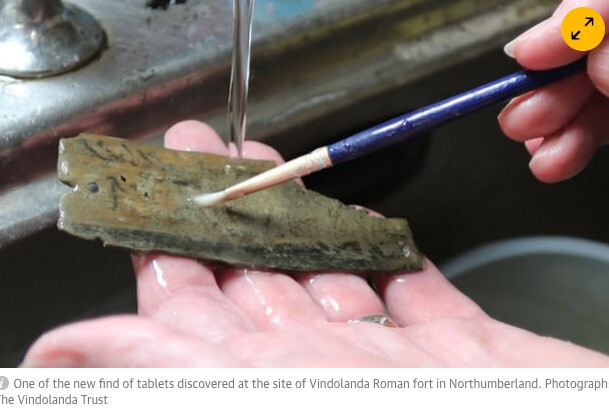 A cache of 25 Roman letters has been found at Vindolanda, the fort below Hadrian’s Wall where the most famous documents from the Roman world were discovered in 1992, first-person accounts of cold feet, beer running short, and jolly birthday parties at the northernmost edge of the empire.

The tablets are still being conserved, before being scanned with infrared light which should make the faint marks in black ink legible, but the cursive script is invariably a cryptic crossword puzzle that will take experts many months to solve.

However, the archaeologists have already spotted that one of the tablets may refer to a character already well known from the original find: Masclus was then writing to his commanding officer asking for more beer supplies to be sent to his outpost on the wall. In the newly discovered letter, Masclus is requesting leave – possibly with a painful hangover. 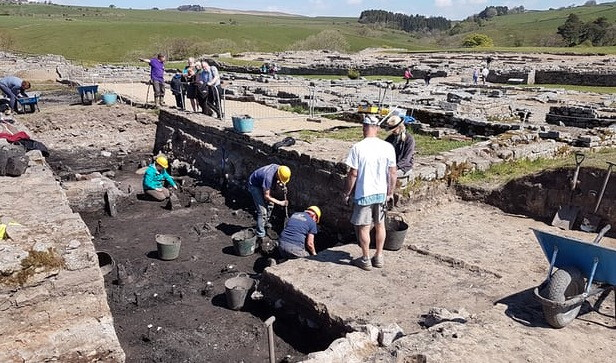 Most of the new letters are written like the original find on thin slivers of birch, but there is particular excitement about one double-leaved oak tablet, as the two pieces of timber folded together usually give particularly good preservation of ink and the wood was used for more important correspondence than the more plentiful birch.

“This is the find I have been hoping for all my working life,” said Andrew Birley, the second generation of his family to lead excavations and head the trust which owns the site near Bardon Mill in Northumberland. “I was a lad of 17 when the first letters were found, and every season since then I have hoped, but never really expected, that more might turn up. My father has been rather poorly recently, but by the time I got home he had cracked open a bottle of champagne and the level had already fallen considerably.”

Although fragments of letters had been found across the site from the 1970s on, the main cache of hundreds of letters was discovered in 1992. Most are preserved in the British Museum, with some on loan to Vindolanda. More than 700 have been translated and published and the find was declared the most important archaeological find ever in the UK, with the oldest written decades before Hadrian’s Wall was built. They are not as old as the remarkable Bloomberg tablets found on a London site , which were written within the first decade of Roman London, but are much more personal and chatty.

The new Vindolanda tablets were found on 22 June at the bottom of a trench in the deepest level of the complex site of a fort which was repeatedly rebuilt in turf, timber and finally stone. They date from the 1st century AD – “between the farmer’s field and the first Roman foundation”, as Birley put it.

His mother Patricia, who worked on the original find, and took over from her husband Robin as director of the Vindolanda Charitable Trust, has come back to the site to work on the conservation and interpretation of the tablets. Robin pointed out that some of these new ones are so well preserved that they can be read before going through the long conservation process, adding: “There is nothing more exciting than reading these personal messages from the distant past.”

Unlike his father’s great find on a bonfire site, Andrew Birley said the position of the new letters was odd. “They were spaced out at regular intervals along the line of a trench, under a rubble-filled foundation layer. We wondered if somebody was carrying them in a bag with a hole in one corner, or if somebody had been walking along reading them and chucking them away one by one.”

The Bloomberg tablets were written on a thin coating of wax, which could be smoothed down and re-used – making interpretation of the faint scratches left in the underlying timber painful. The Vindolanda tablets however were intended as permanent documents, written in ink.

“These are not Post-It notes,” Birley said, “these were written when somebody had something of importance to communicate. The oak one is very exciting, but completely illegible at the moment as the oak blackens over the centuries and the ink fades, but we hope the text will pop back up under infrared light. We hope to learn much more about day-to-day life in Vindolanda – and possibly more about characters who are already familiar to us.”

Birley is now certain that they have recovered all the letters in the new cache. The delicate fragments of paper-thin wood were excavated by one person working in the trench, and a whole team going through every fragment of excavated material. “By the end of the day it meant that every person on site, including our wonderful volunteers, had found at least one piece of a letter. It was a day none of us will ever forget.”

See more at: The Guardian