This is an interesting proposition that was first put forward by renowned archaeologist Yigael Yadin. In January 1850 Austen Henry Layard discovered, what he was to call, "The Room of the Bronzes". He found this small room in a palace built by King Ashurnasirpal II of Assyria (c.884-859BCE). In it were twelve bronze cauldrons, some of which contained a total of 170 metal bowls and vessels. These sets of bronze items seem to have made up some form of luxurious drinking services. 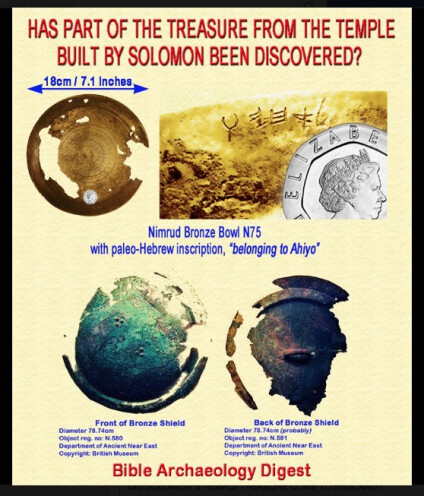 Some of these objects bore Semitic inscriptions written in Phoenician/Hebrew script. It is therefore possible that this hoard of bronze treasure was collected as booty or tribute by the Assyrian kings, Tiglash-pileser III, Sargon or Sennacherib during their campaigns in Syria, Pheonicia and Israel.

Professor Yadin suggested that this hoard of treasure could have included the bronze treasure received from Ahaz, King of Judah, by Tiglath-pileser III as described in 2Chronicles 28:21-22 ~ "Ahaz took away a portion out of Yahweh’s house, and out of the house of the king and of the princes, and gave it to the king of Assyria; but it didn’t help him. In the time of his distress, he trespassed yet more against Yahweh, this same king Ahaz." Another suggestion is that some of these bowls may have been given to Sennacherib by Hezekiah, as in 2King 18:13-16.

A number of this hoard of bowls was donated to the British Museum and nine had Semitic inscriptions on them. Amongst the names were possible Hebrew names - Peni’el, Yibhar’el & El-heli  - each compounded with “El”, the name or title meaning “God”. However, the Phoenicians also used “El” to refer to God. Other names were definitely pagan in origin - Ba’al-ezer & Atar’ezer - although it is not unknown for Israelites, in Scripture, to bear seemingly pagan names.

CONSIDERATION OF THE HEBREW SCRIPT
Our picture today shows my attempt at copying the inscription from one of the bowls, as we can see it is the phrase, "belonging to Ahiyo”. The second letter is normally accepted as an Aleph (a); all the other letters fit nicely with the Hebrew of the Meshe Stele (9th C BCE) however the Aleph seems to be evolving into the Hebrew of the Siloam Inscription (late 8th C BCE).

WHO IS "AHIYO"
The name "Ahiyo" is given to three people in the Bible (see "Ahio" in 1Chronicles 8:12-16, 1Chronicles 8:29 & 1Chronicles 13:7-10). In the last of these references, Ahio is partnered with Uzza to escort the Ark of the Covenant" to Jerusalem - Uzza died because he sought to stop the Ark from falling by touching it.

Some scholars have suggested "Ahiyo" is the shortened form for "Ahijah". In the Bible we find at least nine characters with the name "Ahijah". This name is variously written with the Hebrew Chet, as in this inscription, with the Hebrew letter Hay and, at least once ending with a Vav, as here (see 1Kings 14:4). These differences suggest that the Hebrew consonants Chet & Hay could often be transposed. The ending of this name "ya", "yah" or "yahu" was common amongst Israelites and spoke of their allegiance to YHWH.