Mary Magdalene is arguably the best known and most popular sinner of the New Testament. A great deal of the romantic portrayal of Mary, however, has no foundation in the Scripture, but is the 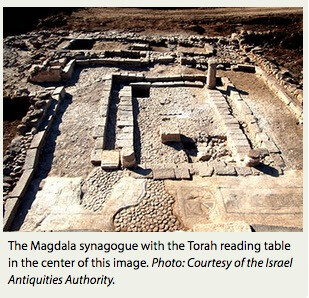 product of a later Christian tradition, which ultimately inspired contemporary cinematic depictions of her. Take her name and her hometown as an example. The name Mary (Miryam, in Hebrew) was so common that the Gospels always had to specify which Mary from within the inner circle of Jesus’ followers: Mary the mother of Jesus, Mary the mother of James, Mary the wife of Clopas, and “Mary called Magdalene” (Maria hē kaloumenē Magdalēnē; Luke 8:2).

But what does the epithet Magdalene mean? A later tradition took it to mean “from Magdala.” The only possible Gospel reference to a place of that name is Matthew 15:39, where we see Jesus coming “to the region of Magdala,” rendered, however, in some manuscripts as Magadan. And it isn’t until the sixth century that literary sources inform us about pilgrimage to Mary Magdalene’s alleged hometown on the shores of the Sea of Galilee called Magdala.

The place-name Magdala is very likely preserved in the name of Qarīyat al-Majdal, an Arab village, which existed by the Sea of Galilee until 1948. Ancient sources, for their turn, speak of a place called Taricheae, which is a derivation of the Greek “factories for salting fish,” or more precisely, “the vats used for salting fish.”

From these same ancient sources—written in Greek and Latin—it is apparent that Taricheae was a considerable city, likely the most important center on the western coast of the Sea of Galilee until the foundation of Tiberias, in 19 C.E. It is also apparent that the source of the fame and wealth of this former fishermen’s village was fish trade. The population of Taricheae grew to approximately 30,000 by the mid-first century, as a prominent Jewish historian Flavius Josephus implies in his account of the Roman suppression of the First Jewish Revolt in 66–70 C.E.

Josephus also recorded the abrupt end of the city in the year 67:

Modern archaeological excavations at Taricheae/al-Majdal/Magdala on the shore of the Sea of Galilee confirm the testimonies of ancient authors about the affluence and prosperity of this Galilean city and give more credence to the identification of Taricheae with Magdala.

Following the uncovering of a well-preserved ancient boat near Magdala in 1986, the most exciting discovery took place in 2009, 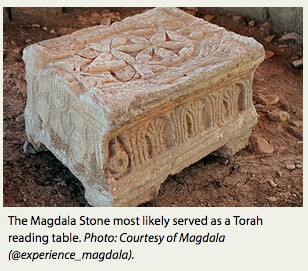 when archaeologists of the IAA—ahead of the development of the local tourist center—discovered a synagogue. One of perhaps only eight synagogues identified so far in Israel as dating from the first century C.E., it provided one splendid find—the so-called Magdala Stone, a Torah reading table sculpted in stone with reliefs depicting a seven-branched menorah and possibly the Jerusalem Temple.

The most recent excavations at Magdala, by the Magdala Archaeological Project under the direction of Marcela Zapata-Meza of the Anahuac University of Mexico, revealed four ritual baths, or mikva’ot. These baths and the synagogue further strengthen the image of a Jewish city bursting with religious life. But on-going excavations also reveal tangible signs of the reported destruction, indicating that the Jewish population of the city took measures to protect their sacred sites from desecration by the approaching Roman army in 67 C.E. 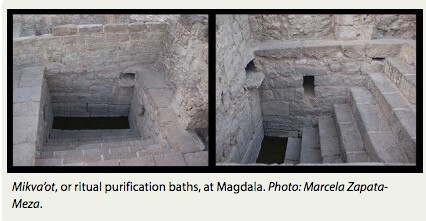 For a full description and discussion of the newly discovered mikva’ot in Magdala and what the Magdala excavations tell us about the moments preceding the Roman conquest of the city on the western coast of the Sea of Galilee, read Marcela Zapata-Meza and Rosaura Sanz-Rincón’s article “Excavating Mary Magdalene’s Hometown” in the May/June 2017 issue of Biblical Archaeology Review
Tags: magdala, mary, mary magdalene, ritual baths
119 Blog