Discovery brings us face to face with the Israelites’ archenemy 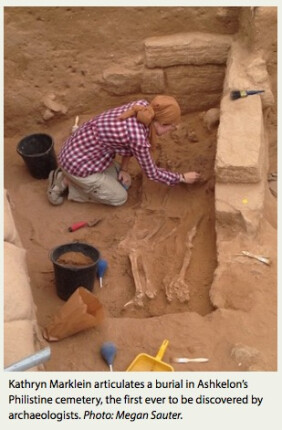 The first and only Philistine cemetery ever discovered has been found outside the walls of ancient Ashkelon. As one of the major Philistine city-states during the Iron Age, Ashkelon was a significant Mediterranean port and boasted a thriving marketplace. Excavations at Ashkelon have revealed many details about how the Philistines lived: the kind of houses they built; the food they ate; the plates, bowls, cups, pots and jars they made; the tools and weapons they used; the jewelry they wore; the imports they bought; the way they made clothes; and much more.

Now Ashkelon has yielded the Philistines themselves.

Directed by Lawrence E. Stager, Dorot Professor of the Archaeology of Israel, Emeritus, at Harvard University, and Daniel M. Master, Professor of Archaeology at Wheaton College, the Leon Levy Expedition to Ashkelon discovered the Iron Age cemetery in 2013 and began excavating it extensively in 2014. Three seasons of significant investigation have revealed previously unknown details of the Philistines in death—and life. First of all, the cemetery provides a window into Philistine burial practices.

“Ninety-nine percent of the chapters and articles written about Philistine burial customs should be revised or ignored now that we have the first and only Philistine cemetery found just outside the city walls of Tel Ashkelon, one of the five primary cities of the Philistines,” said Lawrence E. Stager.

Various theories have been proposed about Philistine burial practices: Some thought that the Philistines were burned at death, like Patroclus and other figures in Homer’s Iliad. Others connected late 13th-century B.C.E. Egyptian anthropoid ceramic coffins with the Philistines. While a cemetery has been found at Azor (dated to the Iron Age 1), located at the northern boundary of Philistia, Ashkelon’s cemetery is the first to be found in the heartland of Philistia—and the first to be indisputably Philistine. As such, it is the standard for measuring all other burials claimed to be Philistine, such as the tombs found at Tel Farah (South) and near Tel Eitun, which were found beyond the limits of Philistia but argued by some to be Philistine. All of these “Philistine” burials and practices must be reevaluated in light of Ashkelon’s cemetery—as should perhaps the cemeteries found at Ruqeish (dated to the Iron Age 2) and Erani (Iron Ages 1–2), located at Philistia’s southern and eastern boundaries, respectively.

More than 210 individuals have been excavated from Ashkelon’s cemetery. Their burials have varied from simple pit internments and cremations in jars to interments in ashlar-built tombs—with the most frequent being pit internments. Grave goods dated from the 11th–8th centuries B.C.E. accompanied some of the Philistine burials. The most common items included in Philistine burials are small juglets. Storage jars, bowls and juglets have been found next to many individuals; these installations consist of a storage jar standing upright with a bowl sitting on its top opening and a juglet resting inside the bowl. 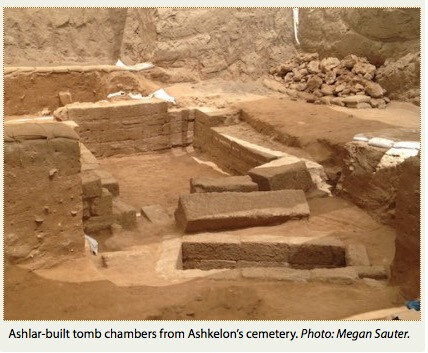 Many of the decorated juglets from the cemetery were imported from Phoenicia. This is not surprising since the Philistines had close ties with Phoenician cities of the central Lebanese coast, such as Tyre, Sidon and Byblos. This close relationship is reflected in the Hebrew Bible (see, e.g., Jeremiah 47:4). From other excavated areas at Tel Ashkelon dated to the 12th–7th centuries B.C.E. (the Iron Age), we see that the largest portion of Ashkelon’s imports came from Phoenicia.

As the point where three of the world’s major religions converge, Israel’s history is one of the richest and most complex in the world. Sift through the archaeology and history of this ancient land in the free eBook Israel: An Archaeological Journey, and get a view of these significant Biblical sites through an archaeologist’s lens.

In addition to the many ceramic vessels from Ashkelon’s cemetery, jewelry, amulets and weapons have also been discovered. Individuals were found wearing delicate silver earrings, as well as bronze necklaces, bracelets, earrings and rings. A few bracelets with alternating bronze and carnelian beads and necklaces with alternating carnelian beads and cowrie shells were found; although the strings that originally connected these beads had long deteriorated, the beads themselves stayed in their original positions.

Amulets and scarabs were found with some individuals, as were weapons. Notably, one warrior was buried with a quiver full of bronze arrows. This discovery was made by Adam Aja, Assistant Curator of Collections at the Harvard Semitic Museum and the Expedition’s Assistant Director, who supervised the excavation of Ashkelon’s Philistine cemetery. Although the cemetery has produced a large quantity of grave goods, the majority of the Philistines were buried without personal items.

The difference between Philistine burials and other burials in the region is compelling. The earlier Canaanites, as well as the Israelites and Judahites of the Iron Age, buried their dead in two steps. They first laid out their dead—usually on a bench in a tomb—and waited for the corpses to deflesh. Then about a year later, they gathered the deceased’s bones into niches in the tomb—repositories—where the bones were mixed with those of their ancestors. This process is not seen in Ashkelon’s Philistine cemetery, which has instead yielded many fully articulated skeletons. Sometimes burial pits would be dug again, and new individuals would be laid on top of previous burials—with their own grave goods—but the earlier burials were not intentionally disturbed. Relationships between those buried in the same pits and tombs are currently being investigated.

Not only does Ashkelon’s cemetery shed light on Philistine burial practices, but it also illuminates the Philistines as a people group.

“After decades of studying what the Philistines left behind, we have finally come face to face with the people themselves,” said Daniel M. Master, Co-Director of the Leon Levy Expedition to Ashkelon. “With this discovery we are close to unlocking the secrets of their origins.”

The Bible records that the Philistines, Israel’s archenemy, came from Caphtor (see, e.g., Amos 9:7). Many correlate Caphtor with the island of Crete. An Aegean heritage for the Philistines lines up well with the archaeological finds from Philistia. Modern excavations at the Philistine sites of Ashdod, Ekron, Ashkelon, and Gath (Tell es-Safi)—four city-states of the Philistine Pentapolis—have demonstrated that the Philistines brought their own distinctive types of pottery, building styles, weapons, jewelry and weaving with them when they settled on the southern coast of Israel around the 12th century B.C.E. 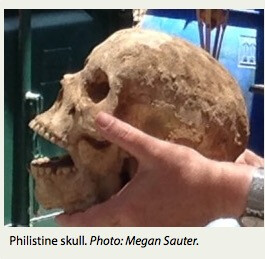 Philistine burials, has already identified some of the illnesses and traumas that plagued the Philistines. Her team’s study of the material is sure to yield many other insights into the Philistines, such as common traits and average life span. Although their investigations are just beginning, Fox and her team have noted a curious phenomenon: The vast majority of the individuals from Ashkelon’s cemetery are adults. Just a small percentage is children and infants. In a culture that surely experienced high rates of infant mortality, this is surprising. Where did the Philistines bury all of their babies? This question warrants further investigation.

The discovery of Ashkelon’s cemetery was announced today, July 10, 2016, at a press conference in Jerusalem and coincides with the opening of Ashkelon: A Retrospective, 30 Years of the Leon Levy Expedition, an Israel Museum exhibition at the Rockefeller Archaeological Museum in Jerusalem. The exhibit features discoveries from the Philistine cemetery, as well as artifacts uncovered from recent excavations at Tel Ashkelon that are representative of the site’s long, diverse occupational history from the Chalcolithic period through the Crusades. Highlights include the famous Canaanite silver calf (dated to the 16th century B.C.E.) that was found in a shrine on Ashkelon’s ramparts and beautiful imported Greek pottery from Ashkelon’s Philistine marketplace that was well-preserved due to Nebuchadnezzar’s destruction of the city in 604 B.C.E.

2016 marks the final season of the Leon Levy Expedition to Ashkelon, which began excavating the site in 1985. The discovery of the Philistine cemetery is a nice addition to 30 years of extraordinary finds at Ashkelon.