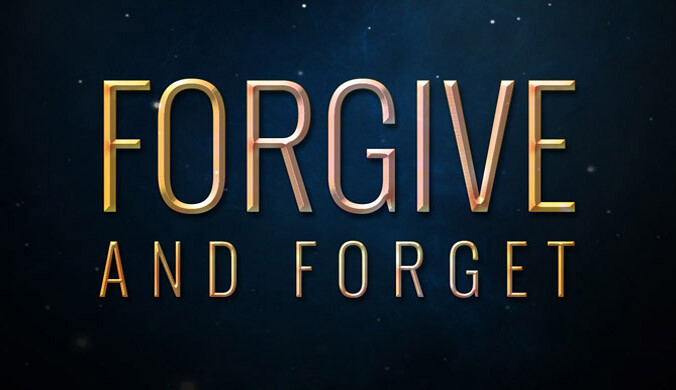 Many of us are familiar with the mantra “forgive and forget”, but what does this mean?  In a fallen world full of people who live in the flesh, it’s easy for us to offend or take offense whenever sin is involved.  Yet Yeshua tells us that we are to forgive those who sin against us.  Does forgiving someone mean to forget or ignore what happened?  As followers of Yeshua, how does this work? What does it mean to “turn the other cheek”?  We will address these questions over 2 blogs.

Forgiving.  What Does It Mean?
According to Scripture, forgiveness is an integral part of our lives.  We are to forgive others who sin against us and the Father forgives our sins. In fact, forgiving others is integral for communication and communion with the Father (Matthew 6:15, Mark 11:25).  Yet forgiveness isn’t specifically defined for us, at least not openly.  To get a picture of what it means to forgive, we need to look at the word first in the Hebrew and then in the Greek.

In Hebrew, two different words are used to mean “forgive”, nasa and salach (H5375/H5545).  Nasa means to lift, to bear, to carry, to take, or take away.  Salach means to forgive, release, or pardon.  In Greek, we again see two words, the most commen is aphiemi, G0863, meaning to forgive, free, permit, and abandon.  The other is charizomai, G5483, meaning to forgive, to give, or to favor.

What Does Forgiveness Look Like?
According to Psalm 38:4, sin is a burden.  When we sin against someone, or they sin against us, not only are we inhibiting a relationship with and forgiveness from the Father, but a burden is placed upon both parties.  The one sinning is then carrying the burden of their sin upon their shoulders.  The one sinned against, if they do not forgive, is now carrying the burden of unforgiveness, hurt, and having something against a brother.  The act of forgiving another does three things, 1) the one who is sinned against is freed from the burden of unforgiveness they were carrying.  2) They are once again able to be forgiven by the Father for their own sins.  3) Once forgiven, the offender is now released of the burden of their sin from the one they offended.  However, they still need to make the appropriate reparations and ask forgiveness from the Father before they are completely freed of their burden.

Yeshua illustrated these principles when he became the sacrifice for our sins.  Remember the definitions of forgive in Hebrew being: to lift, remove, take away, to bear?  This is precisely what Scripture tells us Yeshua did.  He lifted from us the burden of our sin, he bore our sins (1 Peter 2:24), and he was crushed beneath the weight of our iniquities (Isaiah 53) as he stumbled through the streets of Jerusalem.  Even today, Yeshua’s sacrifice “takes away” our sins (1 John 3:5), releasing us from the bondage that sin puts upon us.  What right do we have to lay the burden of unforgiveness upon our brothers?  Forgiving others provides the opportunity for both parties to experience the freedom that Yeshua gives.  Remember, if we do not forgive others, then the Father will not forgive us of our sin.  Without forgiveness we are living in sin which deserves death.

The Torah lays out for us how to make amends in situations where a brother wrongs us; it is not to exact revenge but to forgive.  God is forgiving (Exodus 34:7) and God is love (1 John 4:8).  If we are to love our neighbor, we must forgive them.

We hope that this has blessed you. Remember, continue to test everything.