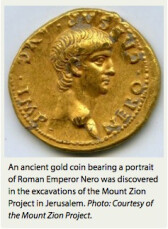 archaeological excavations just outside the Old City of Jerusalem in Israel. The coin was found in the excavations of the Mount Zion Project, codirected by Shimon Gibson, Visiting Professor of Archaeology at the University of North Carolina at Charlotte, and James Tabor, Professor of Ancient Judaism and Early Christianity at UNC-Charlotte. This Nero coin is especially significant because it was discovered on a scientific excavation, so its findspot is clear.

The coin, called an aureus—the standard gold coin in ancient Rome, bears on its obverse side (see image above) a portrait of Nero and an inscription reading “NERO CAESAR AVG IMP” (Nero Caesar Augustus Imperator). Nero was Roman emperor from 54 to 68 C.E. On the Nero coin’s reverse side (see example below) appear an oak wreath surrounding the letters “EX S C” (Ex Senatus Consulto—“by order of the Senate”) as well as the inscription “PONTIF MAX TR P III” (Pontifex Maximus Tribunicia Potestas III).1 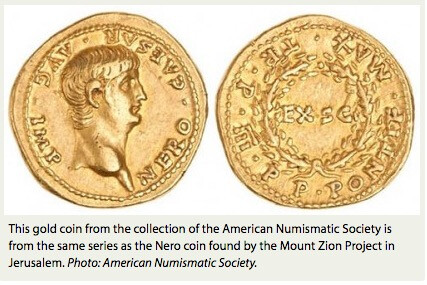 “Pontifex Maximus means ‘greatest priest,’ and it was the most important religious position in Rome,” explained Jane Sancinito, a Ph.D. candidate in Ancient History at the University of Pennsylvania who specializes in Roman imperial and Byzantine numismatics, in an email to Bible History Daily. “The Tribunicia Potestas, or tribunician power, was an important legal power first given to Augustus. The legend says this is the third (III) year in a row that Nero held this power and thus provides us with the date. Nero became emperor in 54 C.E., so three years later is 56/57 C.E., depending on the month.” (Scroll down or click here to read Sancinito’s comprehensive analysis of this coin type.)

Numismatist David Jacobson, who studied the Nero coin on behalf of the Mount Zion Project, agrees that the aureus was struck in 56/57 C.E.

“The coin is exceptional, because this is the first time that a coin of this kind has turned up in Jerusalem in a scientific dig,” said dig codirector Shimon Gibson in a UNC-Charlotte press release. “Coins of this type are usually only found in private collections, where we don’t have clear evidence as to place of origin.” 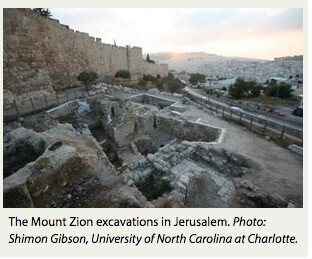 The Nero coin was excavated from rubble near the remains of first-century C.E. villas where members of the Jewish priestly caste may have lived. The Mount Zion Project has been investigating these villas for the last several years.

“The coin probably came from one of the rich 2,000-year-old Jewish dwellings which the UNC-Charlotte team have been uncovering at the site,” said Gibson. “These belonged to the priestly and aristocratic quarter located in the Upper City of Jerusalem. Finds include the well-preserved rooms of a very large mansion, a Jewish ritual pool (mikveh) and a bathroom, both with their ceilings intact.”

Nero was the fifth emperor of the Roman Empire and the last of the Julio-Claudian dynasty. Nero is known in a popular saying for having fiddled while Rome burned in 64 C.E.

“He definitely played the cithara, but the saying is a modern one,” explained Dr. Jennifer Gerrish, Assistant Professor of Classics at the College of Charleston. “According to ancient Roman historian Tacitus, though, Nero was rumored to have sung about the destruction of Troy during the fire.”

“When people blamed him for the fire, because it conveniently burned down the districts where he had hoped to build a palace, he scapegoated the Christians and tortured them,” Gerrish added.

While there is no indication that Nero visited Jerusalem during his reign, the Nero coin discovered by the Mount Zion Project is reflective of the presence of the Romans—at this time, Judea was a Roman province.

“The coin was minted in Rome (there were only two mints in the empire at this time, one at Rome and the other at Lyons) and therefore traveled a long way to reach its final deposit,” said numismatist Jane Sancinito. “Coins, and especially gold coins, entered circulation primarily as military pay, so it likely changed hands several times before it came to a priestly villa in Jerusalem.”

A decade after the Nero coin was struck, in 66 C.E., the First Jewish Revolt broke out in Judea. In 67, Nero dispatched a general by the name of Vespasian (who would subsequently become emperor in 69) to quell the uprising. The revolt concluded in 70 with the Roman destruction of Jerusalem and the burning of the Temple.

1. This coin type typically bears the legend “PONTIF MAX TR P III P P”; “P P” is an abbreviation for Pater Patriae, or “father of the country,” an honorific title given to emperors. The UNC-Charlotte press release, however, does not include “P P” in the legend of the coin found by the Mount Zion Project, and an image of the coin’s reverse side has not been made available. Whether “P P” appears on this Nero coin from Jerusalem has not yet been confirmed by the directors of the project.