What was King Hezekiah’s reform like on the ground?

One of the most significant changes in the religious life of ancient Israel occurred during the reign of the Judahite king Hezekiah, in the late eighth century B.C.E. The Hebrew Bible provides us with this image: “He removed the high places, broke down the pillars, and cut down the sacred pole (asherah). He broke in pieces the bronze serpent that Moses had made, for until those days the people of Israel had made offerings to it” (2 Kings 18:4). In doing so, explains the Bible, the faithful king Hezekiah simply “did what was right in the sight of the Lord.” But was Hezekiah really motivated only by “the commandments that the Lord commanded Moses”? What was his reform like on the ground?

The Biblical text is sparse on details of Hezekiah’s reform in Judah, but we can turn to archaeology for assistance. The archaeological remains come from Tel Arad, Tel Motza, Beer-Sheba, Tell Halif and Lachish—settlements with ninth- and eighth-century cultic places—to help us understand what actually happened. Archaeology reveals that, with the exception of Tell Halif, these sites were part of the official Judahite cult under royal control, and it appears that they were all dismantled and buried.

To demonstrate the kind of cultic change that took place, we go first to Arad. The late Yohanan Aharoni of the Institute of Archaeology at 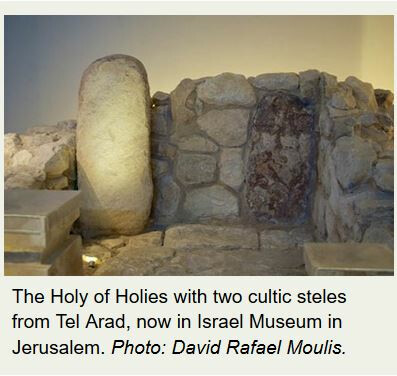 Tel-Aviv University claimed that Arad’s earlier Canaanite village was transformed into a fortress with a shrine and altar in the 10th century B.C.E. The altar was then abolished in the late eighth century by Hezekiah (who prohibited sacrifice), but the shrine remained in use until the end of the seventh century, when it was partly dismantled by King Josiah, who allegedly centralized worship in Jerusalem. Aharoni assumed that this was evidence of two different cultic reforms under two different kings—a view supported also by the Bible (2 Kings 23).

Archaeological re-examination by Ze’ev Herzog, however, revealed that the shrine walls were reduced and the dismantled sacred area was filled in with earth already by the end of the eighth century. As a result, the temple area is well preserved, and nothing in the temple points to a violent destruction. Was the Arad sanctuary buried preemptively in anticipation of the Assyrian king Sennacherib’s campaign (in 701 B.C.E.) to avoid destruction and desecration by the approaching enemy? Archaeology indicates that the burial of Arad happened at the order from Jerusalem and was supposed to disempower the local priests and to centralize the cult to the capital city. This means that the sanctuary and its cultic objects were abolished and buried well before the Arad fortress fell in the hands of the Assyrian army, after only 30 or 50 years of existence. 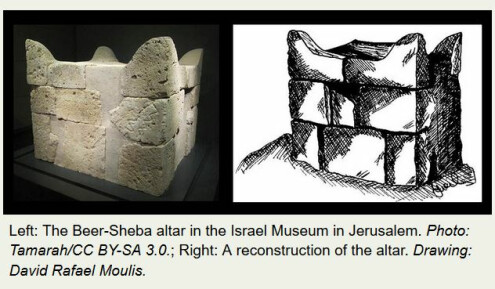 From Arad, we move west to Beer-Sheba. A large ninth-century horned altar was discovered there—already dismantled. Three of its four horns were found intact, embedded in a wall. Their secondary use indicates that the stones were no longer considered sacred. The horned altar was dismantled during Hezekiah’s reign, which we know because some of its stones were reused in a public storehouse that was built when the Assyrians threatened Judah1 and was destroyed by the Assyrian army in 701.

There is no archaeological evidence of a sanctuary at Beer-Sheba during the Iron Age IIA (c. 980–830 B.C.E.). Yet it is unlikely that an urban center of such importance would have a large offering altar but no legitimate sanctuary. There is an Iron Age krater (large vase) from the site with a Hebrew inscription that says “holiness” or “holy,” which suggests that the vase belonged to a temple or a priest and was used in religious ceremonies, like the two similar vases found in the Arad temple.

Next we move to Lachish. The second most important city in Judah after Jerusalem, Lachish was a military and administrative center in the Judean hills, but we know almost nothing about the Iron Age official cult there. Since the fortress city was besieged and destroyed by the Assyrians in 701 B.C.E., we have some information from extra-Biblical sources: A relief in the royal palace at Nineveh that portrays Sennacherib’s victory over Lachish, which contains a scene of Assyrian soldiers carrying what looks like an incense burner. This would seem to suggest that the Assyrian army had plundered a Judahite sanctuary at Lachish. However, the object depicted on the relief could not be temple equipment, because the places of cult were closed before this time. Instead, it may have been confiscated from the palace or used for heating purposes.

Aharoni believed that he found the Judahite sanctuary at Lachish in a small broad room with benches along its walls. Curiously, cultic objects were found buried in a circle at different elevations and 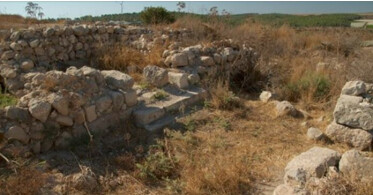 were later covered by a palace building. The pottery assemblage seems to have been deposited in the pit not later than the second half of the eighth century—possibly around 760 B.C.E., when the palace was erected.2 The cultic artifacts must have then belonged to an earlier shrine that was dismantled prior to Hezekiah’s reign.

In 2016, an eighth-century B.C.E. cultic place at Lachish was uncovered next to the main city gate. Archaeologists have called this cultic place a “gate-shrine.” In it were found two small horned altars, whose horns had been cut off and embedded in an adjacent wall. Further, a square toilet was found installed in the shrine but was never used. The toilet was more of a symbolic act of desecration (see 2 Kings 10:27)—part of Hezekiah’s cultic reforms.

We now move to Tel Motza on the eastern periphery of modern Jerusalem, where an Iron Age II temple has been under excavation since 2012. This temple is the second Judahite temple ever discovered. Archaeologists found two archaeological strata that first seemed to resemble the two historical phases uncovered at Arad. The first stratum dates to the tenth and ninth centuries, while the second could be from the seventh or the early sixth century. But the function of the seventh- or sixth-century structure as a temple has no archaeological support. 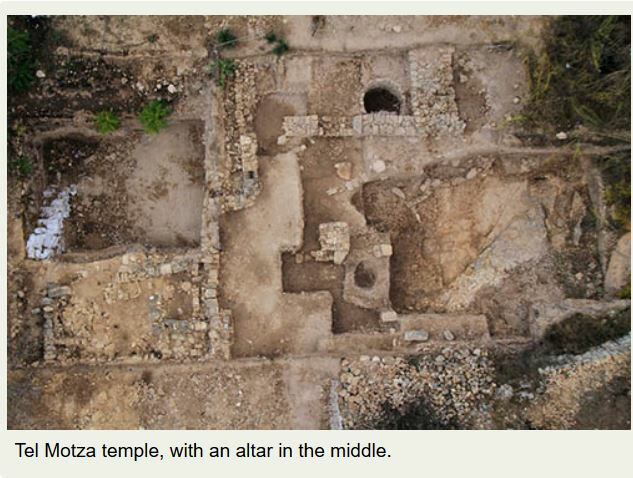 The early sanctuary at Motza consisted of a main hall, a courtyard with an altar and five standing stones. The main altar and this entire temple were filled in with dirt sometime in the ninth century B.C.E. When the sanctuary was rebuilt in the second phase, the floor level was raised, and a monumental public structure was built on the new elevation. Cultic vessels, pottery sherds and bones of sacrificial animals were found near the altar in this later structure, together with pottery that was buried in a refuse pit filled with ash. Near this refuse pit (used during rituals) lay fragments of pottery figurines and the lower part of an incense burner decorated with petals—like one from Arad. All cultic objects were deliberately damaged and covered with a layer of ash. If this seventh- or sixth-century monumental structure was indeed a temple, the process that ended the cult at Tel Motza shares similarities with the Arad temple and might similarly be due to Hezekiah’s cultic changes, but the absence of positive evidence suggests that the Motza temple was abandoned and buried well before Hezekiah’s reign.

Finally, we go to Tell Halif, where a shrine room was discovered inside an Iron Age four-room house. The house was originally a domestic residence. The shrine room was created later by adding benches along its walls. The room contained pottery vessels as well as bone implements, organic material, pumice and arrowheads, the latter being a testimony to the city’s destruction by the Assyrians. Food remains suggest that everything was consumed or used in cultic rituals. A white-painted head of a female figurine (“Judean pillar figurine”), a pottery stand for an incense altar, two flat stones with signs of fire (offering tables) and two limestone blocks can all be interpreted as cultic objects. 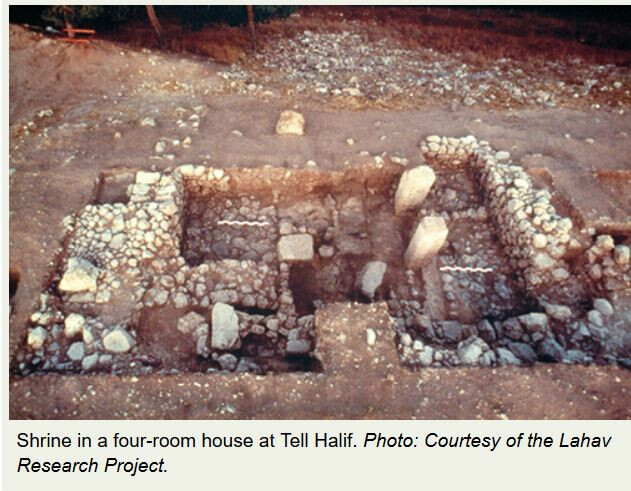 Material culture excavated at the site is associated with food preparation, suggesting that this small house shrine was operated by women during the late eighth century. Like the other Judahite sites, it was destroyed by Sennacherib. But how is it that the shrine remained active later than other cultic sites in Judah? There are two possibilities: (1) King Hezekiah reformed predominantly official, state shrines and did not care about household cults—in other words, the cult at Tell Halif was not abolished by the central authority in Jerusalem because it was beyond the king’s control; or (2) Hezekiah tolerated incense burning where there were no sacrificial altars.

The above examples suggest that three different kinds of cultic changes or reforms took place in the Kingdom of Judah:

(1) Official sanctuaries (together with their cultic objects) were partly dismantled and buried because of their sacred character. This scenario played out at Arad and Motza. The only difference between the two sites is that the cultic life at Motza was terminated earlier than in the rest of Judah.

(2) Cultic objects, such as the altar at Beer-Sheba, and, probably, the shrines at Beer-Sheba and Lachish, were completely removed. If this really occurred at Lachish, it was before Hezekiah’s reign, like at Motza.

(3) Household shrines, such as at Tell Halif, were tolerated by the central authority because nothing more “dangerous” was being sacrificed than incense.

Now, who was responsible? The best candidate for this cult elimination is King Hezekiah, who probably ordered the abolishment of all official cultic sites. Only the Jerusalem Temple and small, household shrines were spared. Apparently, the king did not specify how to abolish the cultic sites, or the author of the Biblical text did not describe the real acts because he did not have detailed information about each city.

Hezekiah’s cult centralization had many aspects. Primarily, it had political and economic aims. At the end of the eighth century, it was simply necessary for Hezekiah to centralize the government, military and religion to the capital city of Jerusalem. Hezekiah prepared the kingdom of Judah for the Assyrian attack and made sure that taxes and revenues from cultic activities were collected centrally (from pilgrims coming to Jerusalem from across the kingdom). Hezekiah also initiated new building projects aimed at protecting Jerusalem: He fortified Jerusalem’s western hill and secured the Siloam Pool, and he built a new tunnel from the Gihon Spring and new storehouses at Lachish and other sites. These projects required money, which the centralization was able to provide. Without a doubt, Assyria—as an enemy of Judah—had a role in Hezekiah’s cultic reforms.

Despite what the Bible says in 2 Kings 23, cultic changes during Hezekiah’s reign were absolute and left nothing to be centralized by King Josiah at the end of the seventh century. Indeed, only one phase of Judahite religious reform is visible in archaeological record, and that one is Hezekiah’s.

David Rafael Moulis holds a doctoral degree in Biblical Theology from the Protestant Theological Faculty, Charles University in Prague. His Ph.D. thesis focused on the Judahite shrine at Tel Arad, and his other publications concern the archaeology and religion of ancient Israel. He has taken part in several archaeological projects in Israel, including at Khirbet Qeiyafa, Tel Azekah, Ein el-Jarba and in Jerusalem’s City of David.

1. Although one of the altar’s stones was discovered in the retaining wall dating from the ninth century B.C.E., we can easily imagine that this wall had fallen and was fixed using later material available at the site.

2. The sanctuary could have been part of the palace, but it seems that the palace complex was no longer in use by the time of Hezekiah’s reign, which suggests that the sanctuary wasn’t connected to the palace after all.