How to Test Everything 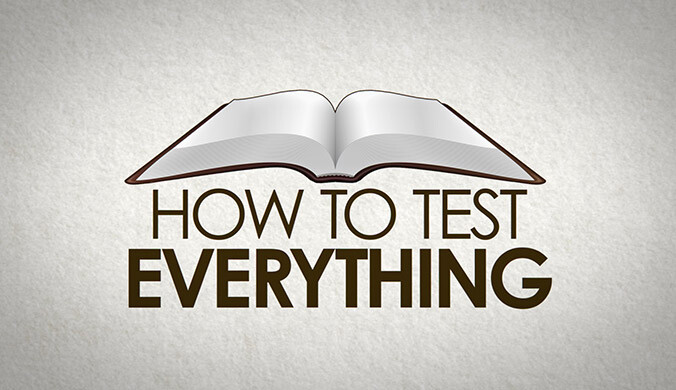 How Can I Test EVERYTHING?

A core principle of 119 Ministries is the concept of “Test Everything.”

1 Thessalonians 5:21
Test everything; hold fast what is good.

Why do we consider that a primary focus of 119 Ministries?  ...because we are not responsible for deciding what you believe in your faith...you are the one responsible.

So often today, many are easily persuaded to believe or follow what their pastor believes, or their congregation believes, or what some book teaches, etc.

We encourage you to not follow us.  Our goal is to enable you to test yourself and your faith to the Word of God.

We do not conclude every teaching in saying “Test Everything” for no reason.

If we do not use a valid method to accurately determine what is true, then we are subject to man’s opinion to form our own truth, which of course, would not be truth at all.

Because of this, we would like to offer some general guidelines to assist you in this core principle of the faith.

The Word of God Test or The Deuteronomy 13 Test.

We actually have a teaching titled “The Deuteronomy 13 Test” which we hope would serve as a great resource for this very important test.  The idea is that our Creator gave mankind the Word of God.  He gave this Word containing instructions (Torah) to all people who chose to align their lives in faith in the Word of God, not just to Israel or the Jews (Leviticus 24:22 ).  He instructed that it was wrong to add to or take away from the Word of God (Deuteronomy 4:2; 12:32).  He stated that any prophet that is  a true prophet will teach according to the Word of God already given, less he be a false prophet (Deuteronomy 13).

Thus, our faith cannot contradict these established principles in the Word of God.  Also, because sin is defined as breaking the law of God (1 John 3:4), and because we understand our Messiah to have been and continue to be perfect and sinless (i.e. Hebrews 5:9),  we cannot accuse our Messiah to have added to, or taken away from the law of God (Deuteronomy 4:2; 12:32) lest He be a false prophet (Deuteronomy 13).  This is also true for James, Peter, Paul, or any other writings found in what we often call the Bible.  All writings must be consistent with the already established Word of God.

Many traditions or Jewish interpretations of the Law of God are simply not found in the Torah or are misunderstood.  It is very easy to accidently add to or take away from the Torah.  Quite often, it is so subtle, that it is difficult to notice.

Likewise, we cannot have Paul declaring the law of God to be bondage, yet the author of Psalms 119 declares the Law of God to be freedom (Psalm 119:44-45).  In fact, the longest chapter in the Bible, Psalm 119, is solely dedicated to the Law of God, detailing how great, perfect, wonderful, joyful, and worthy the law of God is for God’s people...not for just a time, but forever.

That all being said, we must ensure that our theology contains no contradictions.  When contradictions are found, we must reconcile them.  This should not always be a quick process.  Sometimes the path of least resistance is to discard everything.  For example, some begin to throw out the writings of the New Testament, or Brit Hadasha.  They do this not because they should, but because they are unable to reconcile some things that appear to be contradictions.  Thus, it is simply easier to throw it all out.  Therefore, exercise caution when dealing with contradictions in your faith.   It often takes work and much research to find the answers to such circumstances.

Differences exist in Bibles, interlinear, codex’s and manuscripts.  Do not isolate your studies to one or two resources.  The more information you have access to, the more you are enabled to utilize critical thinking and see the big picture to a problem, or find an elusive answer to a difficult issue.

People in our lives are important.  What others think often becomes important to us as well.  Quite often, some fundamental principles of our faith are not necessarily derived from the Word of God but people of influence.  Ask yourself why you believe what you believe.  Find multiple witnesses of strong support in the scriptures.  Hear the opinion of others, and respect them, but take everything back and test it to the Word of God.

Often you will find that strong scriptural support might be lacking, or that contradictions may exists.  You might find that a certain position is completely based on an argument of silence.   Watch out for red herrings.

The Word of God happens to consists of Words.  It should go without saying, but words mean things.  Sadly, because of translation differences, cultural differences, linguistic evolution, metaphorical and poetic language, etc., the meaning of words and how they are being used are not always so clear.

Examine how a Hebrew or Greek word is used in the scriptures.  Read every instance or usage of a word.  When examining Greek, examine the Septuagint (LXX) to see how the Hebrew culture used that Greek word compared to the Hebrew language.

It is easy to arrive to strange doctrines and ideas when we do not even know how words such as spirit, light, God (Elohim), etc. are definitively used in scripture.

Quite often, how a word is first used in scripture, sets the precedence of how it should be understood going forward.

There are so many different types of logical errors that it would be impossible to discuss them all here.  One of the most abused logical fallacies in scriptural discussion is called the “red herring".

The red herring is as much a debate tactic as it is a logical fallacy. It is a fallacy of distraction, and is committed when a listener attempts to divert an arguer from his argument by introducing another topic. This can be one of the most frustrating, and effective, fallacies to observe.

The fallacy gets its name from fox hunting, specifically from the practice of using smoked herrings, which are red, to distract hounds from the scent of their quarry. Just as a hound may be prevented from catching a fox by distracting it with a red herring, so an arguer may be prevented from proving his point by distracting him with a tangential issue.

Another logical fallacy is the accusation that one is on a “slippery slope.”

While this fallacy is a popular one, it is, in its essence, an appeal to probability fallacy. (e.g. if person x does y then z would [probably] occur, leading to q, leading to w, leading to e.)

Logical fallacies are easy to make and occur often.  They are also the type of errors that are the most convincing until the error is exposed.

Greek thinking and Hebrew thinking are two different types of thinking.  Most of the western world thinks like a Greek.  Every author of the Bible spoke in Hebrew and was raised in Hebrew culture and thinking.

This can often cause problems.

We hope that some of these tactics were of value to you.