How Was the Bible Written During and After the Exile?

Biblical Hebrew in a changing world

The Hebrew language has evolved over time. Even during the course of writing the Hebrew Bible (Old Testament), Biblical Hebrew changed, which is apparent when you compare early Biblical texts with late ones.

How was the Bible written during and after the Babylonian Exile? 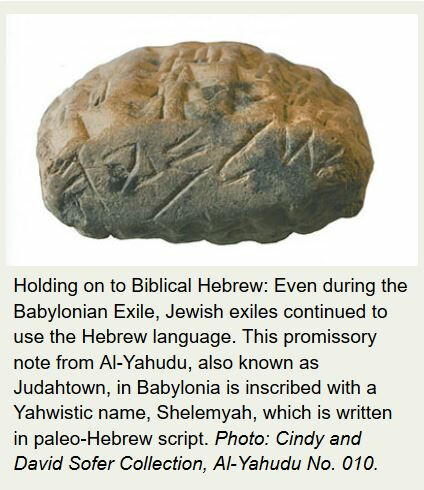 Did the Biblical authors continue to use the Hebrew language even though they were living in lands where Hebrew was no longer the common language? In his article “How Hebrew Became a Holy Language,” published in the January/February 2017 issue of Biblical Archaeology Review, Jan Joosten explains that Biblical Hebrew did not go out of use. Rather the Jewish population continued to use it—and even attached a new reverence to it.

After Nebuchadnezzar sacked Jerusalem and deported Judahite captives to Babylonia, he settled them in cities and villages, such as Al-Yahudu (also known as Judahtown), around the River Chebar. The official language of the Babylonian Empire was Aramaic. Although the Jewish deportees communicated in Aramaic with their new neighbors, they continued to write and speak the Hebrew language in their communities, which helped them preserve a distinct identity. An archive from Al-Yahudu demonstrates this. For example, a promissory note from Al-Yahudu (see above) is inscribed with the Hebrew name Shelemyah, which contains the element “yah” that connects the name holder to his deity, Yahweh. The note is written in paleo-Hebrew script, not Aramaic cuneiform.

While living in foreign lands—and after returning to Palestine—how was the Bible written? Although some of the late books of the Bible were written in Aramaic, most of them were still written in Hebrew. However, this Hebrew is distinct from that found in earlier Biblical texts. Joosten elaborates, “In the late books of the Bible—Chronicles, Ezra-Nehemiah, Esther—an archaic form of Hebrew is reused in a way that indicates it was ‘lifted’ from the earlier text and revivified on the basis of exegesis.”

The Biblical authors of this period studied the Hebrew of earlier books and intentionally incorporated it into their writings. In this process, some words took on different meanings. For example, in earlier Biblical texts, the Hebrew word torah denotes “writing” or “direction,” but in later texts, this word usually signifies “the book in which Jewish law is written down.” The authors’ conscientious choice to continue writing in Hebrew set it apart almost as a sacred language.

Of course, the exiles in Babylon do not represent the only surviving Jewish community at this time. Joosten also notes that “there was a western exile and diaspora, exemplified by the prophet Jeremiah, who fled with a group of exiles to Egypt (see Jeremiah 43–44). As the elite of Jerusalem was led by the Babylonians to the East, other Judahites fled to the West. A sizable colony of Jews was settled in Elephantine, a Nile island in upper Egypt, in the fifth and fourth centuries B.C.E.”

Both groups of exiles revered the Hebrew Bible and committed to preserve and transmit it faithfully. However, they did this in very different ways. While the Jews in Babylon—and later Palestine—studied and continued to use Biblical Hebrew, the Jews in Egypt decided to translate the Hebrew Bible into the common tongue, which for them was Greek.

In the Hellenistic period, the western diaspora produced the Septuagint, a full translation of Israel’s Scriptures from Hebrew into Greek. The translation of Scripture, as in Egypt, and the classicizing continuation of Hebrew, as in the East, are in a way polar opposites. In the face of Scriptures written in an ancestral idiom that is on the verge of becoming obsolete, one can opt for translation, transferring the meaning of the text into one’s own world—as in the West. But another option is possible too—to turn one’s back on one’s own world and to project oneself into the world of the ancient texts. The second option is the one taken by the Judahites of the Babylonian Exile and followed after them by Judaism of all hues, as it developed in Palestine. The first option, that of translation, was exercised by the Jews of Egypt, who thus followed a distinct path.

From revivification to translation, the Hebrew language was adapted to a changing world. To learn more about the development of Biblical Hebrew, read Jan Joosten’s article “How Hebrew Became a Holy Language” in the January/February 2017 issue of Biblical Archaeology Review.