Is End Times Study A Distraction? 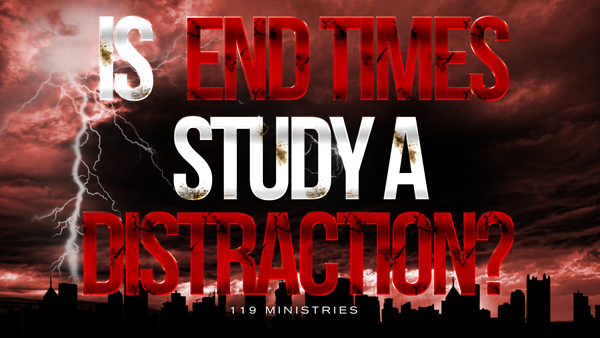 Looking around at society and the world in general, a person with even minimal knowledge of Scripture as it relates to the end of days can see the end is coming up fast.  There are so many signs from Scripture that it would be difficult for us not to realize things are coming to a head.  Throughout biblical history the Creator has sent prophets to proclaim His word, give them direction, and to warn His people about what is coming, calling them to repentance.  According to the Bible, the Spirit gives out many different gifts to the body of Messiah, prophecy is one of these gifts (1 Corinthians 14).  We are to test any and all who claim to have the gift of prophecy or even one who prophesies with the indication that the Creator has given them this “revelation”.  For more on that topic, please see our teaching titled: The Deuteronomy 13 Test.  There is definitely a place for prophecy, but what is its place and how much should we focus on it?

A Place for Prophecy

Without a doubt there is a place for the study of end times, end of days, or end of the world biblical prophecy.  If there wasn’t a need for us to look into the Scriptures and finds signs that we need to look for, then it wouldn’t be in the Word to begin with.  All of the bible has a place, a lesson, and/or an application to our lives; it’s an instruction manual on how we are to live.  So, what place does prophecy have?

Prophecy has at least three purposes.

These are all valuable tools that help us to live our lives, draw closer to the Creator, and to help keep on the true path.  In short, we need prophecy to help us be aware of the world around us and to prepare for things that are to come.  With this in mind, should we let end times prophecy become all-consuming?  Should it be our sole, or even primary focus?


Is Prophecy to Be Our Focus?

As we just mentioned, there is definitely a place, and a need for prophecy for Yah’s people.  We need the “watchmen on the wall” to help us keep aware of the world and events around us (Isaiah 62).  If they were not needed, then the Creator would not send them.   We are all called to be mindful of the world around us, even Messiah told us what to watch out for (Luke 21); yet He gave us no indication that it should be our sole or even primary focus.  In fact, we are to make disciples and spread the truth of the good news (Matthew 28) being careful to obey the Creator, living as Messiah lived (John 14-15, 1 John 2).  Again, we are not saying that we should not study end times prophecy, indeed.  Rather we are saying, it should not become an all-consuming focus.  What can happen when this becomes the focus in our lives?

Not too many years ago a member of our staff and his wife started to get really interested in end times prophecy, the conspiracy theories, and all of the other stuff that comes with it.  For a couple of weeks they did little in their own studies beyond looking at prophecy, the different theories regarding it, theories about the origins of holidays and religious symbols, the “founding fathers” of the U.S., and the Harbinger book.  As can happen when a person surrounds or immerses themselves in these topics, they began seeing conspiracies everywhere and the impending doom of the world.  With all that they were immersing themselves into, one of them actually became a bit fearful and lost their peace.  You see, they had taken their eyes from what really mattered (Scripture, the present they were living in, teaching their family, and studying the Truth of the whole Word), and began to focus on just what was to come.  End times prophecy and such topics are powerful, intriguing, and it’s easy to get sucked in and start to ignore the rest.  There comes a point where these studies cease to be fruitful and instead become a distraction from the more important matter of living one’s life for Yahweh in the present.  Yes, prophecy has a place, but just like the Torah, it’s not good if it’s not used, or applied, correctly.

A distraction can be defined as:
a thing that prevents someone from giving full attention to something else.

If a person isn’t careful, the study of end times prophecy can be just that, a distraction as it was for the couple mentioned above.  They had become so consumed with end times prophecy, that they had become of little value in what mattered most; their relationships both in their personal lives and with the Creator!   Once they put aside what had become a distraction to them, they were again able to better focus on the Word and draw close to the Creator.  This same thing almost happened again when they read the book The Islamic Anti-Christ.  They began to be so consumed and even fearful again, that their focus started to slip.  Thankfully, they realized this much earlier on and things didn’t suffer beyond a few days and nights of unrestful sleep.

End Times Prophecy has great value and is important, but it is not so important that the teaching of the Word, the seeking of the truth in Scripture, and relationships should be put aside or considered of less importance.  The reality is, no one truly knows the truth of how the end times prophecies will play out; the best anyone can do is make a guess based on their interpretation of Scripture and events occurring in the world.  It’s important to be aware so we can look for the signs, but we should not put so much importance on this study that everything else becomes secondary in nature.

We realize that prophecy is a huge field that many study, especially in the various religions.  We realize it has some great value, but in the end, it’s our relationships with each other and with the Father that matter most.  Correctly guessing the time and date that events take place are of lesser value than the teaching of the Word to the nations.  There is much that is wrong with this world; we are to be the light by our example of living the true light, the Word of God.  It’s difficult for us to be the light if we let ourselves get lost in our studies of how and when something is going to happen rather than staying firmly rooted in the study and the teaching of the Word.  Are we saying don’t study end times?  No, we are not; we even have a series on the end of days.  Rather, what we are saying don’t let it so consume you that you lose sight of what matters even more, relationships with your Creator and those He puts in your life.  Whether we, or any other person or group gets a date correct based on data analysis, our daily mission and commission from the Creator doesn’t change.  We are still to make disciples, spreading the whole good news to the whole world.  Don’t let your excitement and passion for end times or anything outside of Scripture distract you from the most important mission we were given, being a light to the world.

We hope that this has blessed you.