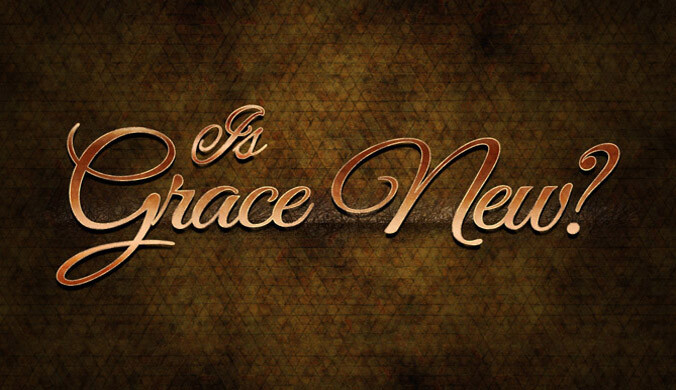 It has been said that there was no grace in the Old Testament and grace did not come until Yeshua in the New Testament.  Let’s test this belief using only the Torah.

Genesis
Genesis 6:5-8
5 Then YHWH saw that the wickedness of man was great in the earth, and that every intent of the thoughts of his heart was only evil continually. 6 And YHWH was sorry that He had made man on the earth, and He was grieved in His heart. 7 So YHWH said, “I will destroy man whom I have created from the face of the earth, both man and beast, creeping thing and birds of the air, for I am sorry that I have made them.” 8 But Noah found grace in the eyes of YHWH.

Notice verse 8, Noah found GRACE in the eyes of YHWH.  Already, in Genesis chapter 6 we find grace from our Creator to those who follow Him.  In fact, Abraham was considered righteous, and this was before Yeshua and the “Mosaic Law” was handed down.  Is the definition of grace different in Genesis than it is in the New Testament?  Did YHWH change His measuring stick?  No, He does not change.  Noah was considered righteous, he obeyed God; he was a type and shadow of Yeshua.  So we already have grace in the Old Testament, it is a type of salvation, a shadow of what is to come and we have evidence that our righteousness is based on obedience.  We see YHWH saved those who followed Him, He chose to save His people.  Let’s examine the book of Exodus for another example of grace.

12 Moses said to the Lord, “See, you say to me, ‘Bring up this people,’ but you have not let me know whom you will send with me. Yet you have said, ‘I know you by name, and you have also found favor in my sight.’ 13 Now therefore, if I have found favor in your sight, please show me now your ways, that I may know you in order to find favor in your sight. Consider too that this nation is your people.”14 And he said, “My presence will go with you, and I will give you rest.” 15 And he said to him, “If your presence will not go with me, do not bring us up from here. 16 For how shall it be known that I have found favor in your sight, I and your people? Is it not in your going with us, so that we are distinct, I and your people, from every other people on the face of the earth?”

17 And the Lord said to Moses, “This very thing that you have spoken I will do, for you have found favor in my sight, and I know you by name.”

Here again in Exodus 33 we find grace given to Moses and the people of Israel.  Verses 16 and 17 use the word “favor”, but it is the same Hebrew word “chen” that was used for grace in Genesis.  Moses received grace from the Creator; Israel received grace from YHWH when He went with them.  He gave them grace as His presence went with them as He had (and continued to do) when He brought them out of Egypt and into the land He had chosen for them.  The exodus itself was also an act of grace; Israel did not deserve to be delivered from slavery, yet YHWH brought them out saving His people.  Now we’ll move on to Leviticus to see if any type of grace from the Creator can be found.

Leviticus
The book of Leviticus does not use the word for grace or favor that we can find; this makes sense because the book is primarily written toward the Levitical priesthood.  However, we can see the grace of the Creator in the sacrificial system described.  The sacrificial system was given so our sins can be atoned for.  At the time it was given, the people had a very real, visual experience in them having to kill an animal personally to be offered up for their atonement.  Without the sacrificial system, Yeshua could not have later become our atonement.  There is grace in lessons learned through the sacrificial process, enabling us to see the penalty for our sins.  YHWH was not required to create a system for us to have our sins atoned for; He could have simply slew everyone and given eternal death to them as they deserved instead of having a way to atonement.

Numbers
Numbers 21:6-9
6 Then the Lord sent fiery serpents among the people, and they bit the people, so that many people of Israel died. 7 And the people came to Moses and said, “We have sinned, for we have spoken against YHWH and against you. Pray to YHWH, that he take away the serpents from us.” So Moses prayed for the people. 8 And YHWH said to Moses, “Make a fiery serpent and set it on a pole, and everyone who is bitten, when he sees it, shall live.”

After yet another episode of Israel complaining against YHWH in Numbers 21, the people are punished with serpents causing many to die.  Once again YHWH saved Israel by His grace when He provided Moses a mode of salvation for them.  Moses was instructed to create a serpent for the people to look to, if they looked to the method of salvation from the Creator they were saved.  Once again, we have salvation by grace, a type of Yeshua, the ultimate example of salvation and God’s grace.

Deuteronomy 10:15
15 Yet YHWH set his heart in love on your fathers and chose their offspring after them, you above all peoples, as you are this day.

Deuternomy 18:15-19
15 “YHWH your God will raise up for you a prophet like me from among you, from your brothers—it is to him you shall listen— 16 just as you desired of YHWH your God at Horeb on the day of the assembly, when you said, ‘Let me not hear again the voice of YHWH my God or see this great fire any more, lest I die.’ 17 And YHWH said to me, ‘They are right in what they have spoken. 18 I will raise up for them a prophet like you from among their brothers. And I will put my words in his mouth, and he shall speak to them all that I command him. 19 And whoever will not listen to my words that he shall speak in my name, I myself will require it of him.

It is by grace that YHWH chose Israel; it is by His grace that His instructions for life were given to them.  It is by His grace that He continually provided a way of salvation and answered their cries for help when they called.  He is the almighty Creator of all, He did not need to choose Israel nor to do all He did for them.  The Creator chose Abraham, Isaac, and Jacob; He didn’t have to choose them and their offspring, He chose to.  He chose to save those people, their descendants over all others simply by His grace.  He even chose the ultimate mode of salvation of the entire world to come through Israel, all by grace.

Conclusion
Noah, Moses, the sacrificial system, and the bronze serpent were God’s provision for salvation; this means they were all types and shadows of Yeshua, they all pointed to Him.  There are many other instances of grace found throughout the Torah, Writings, and Prophets; we have listed but a few from the Torah. In all of these instances, YHWH provided a way of salvation by His grace, and nothing else.  The first four books of the Torah contain types and shadows of Yeshua with the Torah culminating with the promise of Messiah to come.  The coming of Yeshua is grace without question.  The Torah, Prophets, and Writings are full of archetypes of Yeshua, methods of salvation.  Salvation only comes by grace, nothing else.  It should be clear the idea that grace did not come until the New Testament and embodiment of Yeshua is false, a deception, or at least a misunderstanding.  Grace has been from the beginning, just as it was ordained for Messiah to be slain (plan of salvation) from before the foundation of the world.

We hope this has blessed you.  Remember, continue to test everything.  Shalom.