Located on the coast of southwestern Turkey, Limyra has a long, rich history—although the site now lies in ruins. Occupied for more than a millennium, it served as the home for many different religious groups. A recent archaeological discovery at Limyra suggests that a Jewish community also lived there.

Martin Seyer of the Austrian Archaeological Institute explains the history of 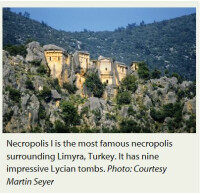 the site and shares an update about recent excavations at Limyra, Turkey, in his article “Mysterious Jewish Building in Roman Turkey” in the January/February 2016 issue of Biblical Archaeology Review.

Limyra, Turkey, was first settled in the sixth century B.C.E. During the fourth century B.C.E., it was the largest city in Lycia (a region on the southern coast of Anatolia). Limyra and its surrounding region have roughly 400 tombs divided among five necropoleis. This is the largest number of tombs of any Lycian city. The site also has temples from the Hellenistic and Roman periods.

Several centuries later, in the Byzantine period, Limyra served as the seat of a bishop. Three basilical churches, including the Episcopal (Bishop’s) Church from the late fifth or sixth century C.E., stood in the city at that time.

In the midst of these pagan and Christian influences, it appears that there was also a Jewish presence at Limyra, Turkey. In a building recently excavated by Martin Seyer, chancel screens with Jewish symbols—menorahs, a shofar and a lulav (palm branch)—have been uncovered. In a later period, these screens were broken and reused as paving stones.

In the same building, close to the discovery spot of the chancel screens, is a water basin. With plastered walls and a floor of marble slabs, this basin was fed by rainwater. A low stone bench rests against one of the walls. Could this basin have served as a mikveh, a Jewish ritual bath?

With its Jewish features, could this structure have been a synagogue? Martin Seyer clarifies that although it is not possible to create a precise stratigraphy for this building because of the high groundwater level, there are still some reasons to interpret this structure as a synagogue:

This building with its Jewish features is the only attestation of a Jewish community in Limyra, Turkey. Previous to its discovery, the only other indicator that there were Jewish inhabitants at Limyra was a solitary Greek inscription on a rock tomb that reads, “Tomb of Iudas.” The recently excavated building with Jewish features shows that there were enough Jewish inhabitants to justify a synagogue.

To learn more about Limyra, read the full article “Mysterious Jewish Building in Roman Turkey” by Martin Seyer in the January/February 2016 issue of BAR.