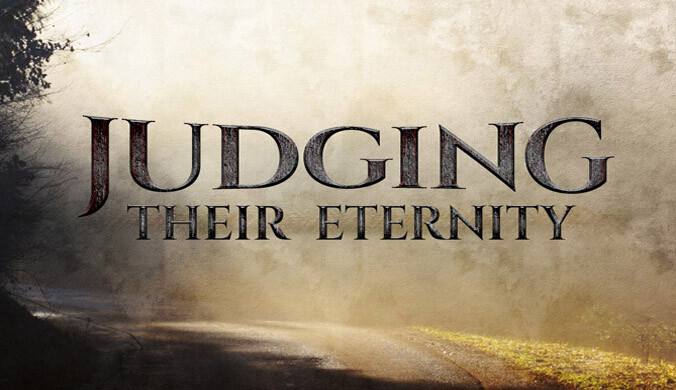 We recently read an interesting post on Facebook relating to judging or not judging others.  Many of us agree we are not to judge other people, but we can judge their fruit (for more on that topic, please see our teaching titled “Fruit of Wolves”).  This particular Facebook post though, had another perspective not often considered.

This commentator said:
“Isn't it interesting, how if someone dies and someone were to say, "That person was not a believer and I fear to think about their eternity," everyone would be up in arms and say, "You're not supposed to judge someone else's eternity...that is not up to you. Only God truly knew their heart." Yet, the very same people will talk about how loved ones are in heaven. If we are not to judge someone else's eternity, then that goes both ways, does it not. We need be careful, lest we be seen as hypocrites. … “

Why is it that we are quick to defend against judging someone (we believe is not a Christian) saying they are going to “hell” or will have an unhappy eternity, but we do not defend the same reserved right of judgment for one we believe to be a “Christian”?  In general, we want to believe the best for someone, that the loving God would forgive everyone so they can have a happy eternity.  So how do we know that one person is more righteous and holy than another?  The answer is we don’t know how truly righteous someone is, only Yahweh knows.  Did not the Pharisee believe himself to be great and righteous and holy when he arrogantly prayed to not be like the sinful man beside him (see Luke 18 for the parable)?  The Pharisee did say those things in the parable only to have Yeshua say he was not righteous.  What makes us think we have the right to condemn someone to hell or usher them into paradise when we are only to judge a person’s fruit?  Put simply, we have no right to judge another’s eternity for the better or for the worse.

In fact, Scripture tells us that many who believe they are righteous, a “shoo-in”, for the kingdom of God will be turned away being told Messiah never knew them (Matthew 7:21-23).  If even people who are doing miracles in His name are turned away, then how can we begin to think we have the right to say someone is going to heaven or isn’t because of their claim to be a Christian.  It’s apparent from Matthew 7 that claiming the name, shem (authority) of the Creator is not enough.  Think about this, if we are going to claim the name of the Creator, shouldn’t be living the way He wants us to as evidence of being under His authority.  If we are not living that way, then maybe we are profaning the shem of our Creator.

Maybe we are taking His name, His authority, in vain.  Our hearts need to be like Messiah, seeking after the Father.  A man after His heart is not one who does whatever he wants, but rather one who only searches out the heart of the Father and obeys His will.  Let your life be one of seeking out the Creator’s heart, obeying His will, so that you may bear good fruit.  In the end we will all be judged by the only righteous judge; He is the one who determines if we make it to paradise or not.  It won’t be because we are claiming to be a Christian, Torah Pursuant, Catholic, or any other belief system.  It will be because of where our faith lies, His grace, and the state of our hearts.  Our actions in this life need to be evidence of the eternal life we seek from the Creator.