Sought for 150 years, the remarkable discovery of the small theater changes archaeologists' perceptions of Roman-conquered Jerusalem after the fall of the Second Temple Sought for 150 years, the remarkable discovery of the small theater changes archaeologists' perceptions of Roman-conquered Jerusalem after the fall of the Second Temple.

And in the course of their work, which has been quietly proceeding directly beneath Wilson’s Arch — the area immediately adjacent to the men’s section of the Western Wall — they unexpectedly discovered a small Roman theater. The dig has not encroached under the Temple Mount.

During the two years of excavations, a new reinforced floor was constructed so as not to interrupt daily worship at Judaism’s holiest site for prayer. 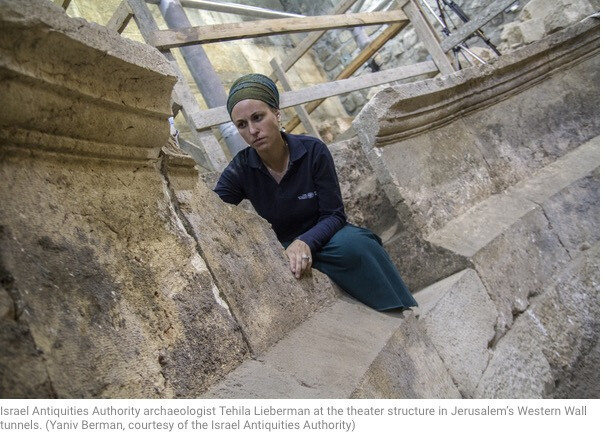 The work is set to continue for another six months, and the expectation is that First Temple-era findings will be uncovered. When the work is completed, the site will be opened to the public.

At a subterranean press conference Monday in the Western Wall tunnel complex, archaeologists Dr. Joe Uziel, Tehillah Lieberman and Dr. Avi Solomon contextualized the discovery of the theater structure directly below Wilson’s Arch as a never-before-seen window into daily public life in the newly Roman-conquered city.

“The discovery of the theater-like structure is a real drama,” said Uziel. 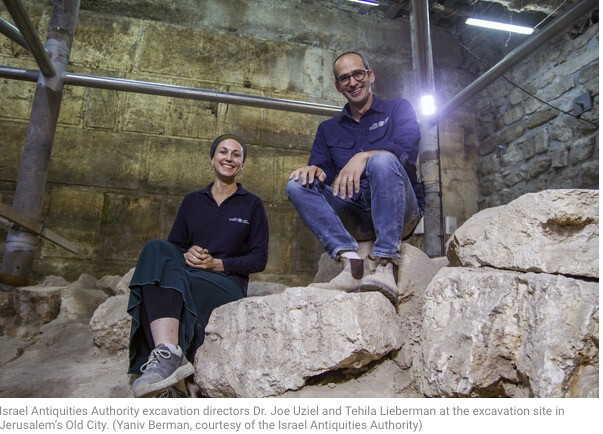 In the 1860s, British surveyor and archaeologist Charles William Wilson was the first to seek such a theater in the vicinity of the Western Wall. The small 200- to 300-seat theater, whose existence is noted by Josephus Flavius and other ancient sources but which has eluded Jerusalem excavations for some 150 years, is the first rediscovered example of a Roman public building in Jerusalem, archaeologists said.

In 70 CE, the Second Temple was razed along with most of the Jewish settlement of Jerusalem. In its place, the Roman colony Aelia Capitolina was established and named after the Roman god Jupiter and the emperor Hadrian (also known as Aelius), who began reconstructing the city in 130 CE. Following the bloody Bar Kochba Revolt of circa 132–136 CE, Jews were banned from the capital aside from on Tisha B’Av, a day of mourning commemorating the destruction of the Temple.

The archaeologists dated the layers of their excavations via pottery typification and coin dating, as well as new high-tech carbon-14 techniques. The final results of the C14 tests will only be known in another few months, but, said Uziel, the theater “dates pretty solidly to the late Roman period.” 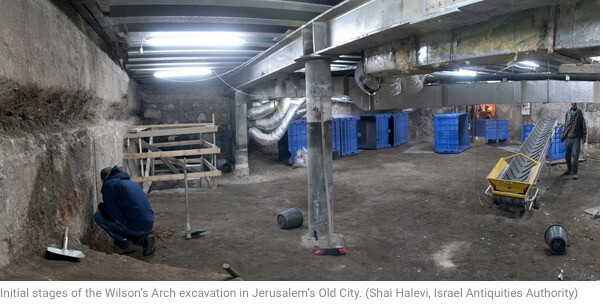 The team expects to continue excavations until next spring. Uziel said while he cannot know what still lies beneath, he expects to reach First Temple-period remains.

The archaeologists dated the layers of their excavations via pottery typification and coin dating, as well as new high-tech carbon-14 techniques. The final results of the C14 tests will only be known in another few months, but, said Uziel, the theater “dates pretty solidly to the late Roman period.”

The team expects to continue excavations until next spring. Uziel said while he cannot know what still lies beneath, he expects to reach First Temple-period remains.

The area under the arch was damaged in a massive earthquake circa 360 CE. Jerusalem residents, concerned the arch would collapse, deliberately covered the spacious area with dirt and debris — thereby also covering all remnants of the theater for some 1,650 years. The latest date on an excavated coin is 380 CE, said archaeologist Solomon.

The discovery of this new theater-structure points to a conquered Roman city in flux: The road’s paving stones were used for benches, and the drainage duct, which archaeologists believe connects with the nearby City of David drainage tunnel, was lowered to make way for the stadium seating which leans against the Western Wall.

What is also interesting, said Uziel, is that it appears that the theater was not fully finished. The stairs are not fully hewn and there are rocks that have guide marks but weren’t fully carved. He speculated that perhaps the Bar Kochba Revolt interrupted its construction. According to the IAA, previous excavations of the Eastern Cardo and Western Wall Plaza provide additional evidence of unfinished buildings from this period.

Hints of continued use of Temple Mount

The theater and other finds from previous excavations give “a hint” into the importance of the Temple Mount following the fall of the Second Temple, said Solomon.

Solomon, who 15 years ago in adjacent excavations discovered a Roman public latrine, said that many cities conquered or established by the Romans throughout North Africa and Europe (in Greece, Bulgaria, and Turkey, among others) display four elements: a latrine, a public bath, a theater, and a temple. There are examples in Israel too, he said, such as in the Roman city Beit Shean, where the bath house is adjacent to the temple, as well as in Jarash in Jordan.

“What happened on the Temple Mount between the destruction of the Second Temple and the Muslim period is one of the riddles we have yet to solve,” said co-excavator Uziel. He said that while some suggest there was a Temple of Jupiter there, there is no evidence because there have been no scientific excavations on the Temple Mount.

“But we do know that the arch still stood and functioned as a bridge,” said Uziel, which leads one to believe there was “something to go to,” he said.

The archaeologists discovered the theater as they were searching for the known Second Temple road. Standing amid the rubble and stadium seating of the theater structure, archaeologist Lieberman said they started to find flat stones and thought they’d reached the road. But then the stones began to appear to curve. Realizing this was no road, she joked, “What is this, a traffic circle?”

“Now we saw there was leisure, entertainment under Wilson’s Arch,” said Lieberman, calling it an “unbelievable” discovery.

She said at this point it is unclear whether the structure served as an odeon (a small acoustic roofed theater) or a bouleuterion (a city council), or even perhaps both. As the stadium seating abuts the Western Wall, Lieberman noted that the backs of the audience would face the Temple Mount, perhaps hinting at the unimportance of the site to the Roman audience.

Lieberman said the site will eventually be made open for the public as part of the Western Wall Heritage Foundation’s Western Wall Tunnel Tour.

Lieberman said the archaeologists hope that the water drainage system can be connected to the one visited by tourists at the City of David, which currently ends at Robinson’s Arch in the southern section of the Western Wall.

The archaeologists’ findings, including a more in-depth look at their high-tech dating system, will be presented to the public for the first time at the conference “New Studies in the Archaeology of Jerusalem and its Region,” to be held this week in Jerusalem at the Hebrew University.

See more about this at THE TIMES OF ISRAEL