The Lord bless you and keep you; the Lord make his face to shine

upon you, and be gracious to you; the Lord lift up his countenance upon you, and give you peace.—Numbers 6:24–26
When unrolled, the two ancient amulets from Ketef Hinnom revealed miniature writing that had been painstakingly inscribed on them. Researchers discovered that the inscriptions included blessings similar to Numbers 6:24–26. Photo: © Israel Museum, Jerusalem, by Nahum Slapak.
In 1979 during the excavation of a late Iron Age (seventh century B.C.E.) tomb at the funerary site of Ketef Hinnom outside of Jerusalem, archaeologist Gabriel Barkay uncovered two small silver scrolls—no bigger than the diameter of a quarter—that were originally worn as amulets around the neck. When researchers from the Israel Museum, Jerusalem, unrolled the sheets of silver, they detected tiny lines of the ancient Hebrew script inscribed on them. High-resolution photos of the miniature writing were taken in 1994 by the West Semitic Research Project at the University of Southern California, giving researchers the opportunity to study and decipher the Hebrew text on the ancient amulets. When they finally read the arcane writing, the researchers discovered that the inscriptions, dating to the eighth–sixth centuries B.C.E., contained blessings similar to Numbers 6:24–26.1

The miniature writing on the silver scrolls was clearly not meant to be read—the letters are too small, and the writing was furthermore concealed inside the rolls. If this was the case, then what purpose did they serve? In “Words Unseen: The Power of Hidden Writing” in the January/February 2018 issue of Biblical Archaeology Review, Hebrew Bible scholar Jeremy D. Smoak discusses what these ancient amulets from Ketef Hinnom can tell us about religion in ancient Judah. 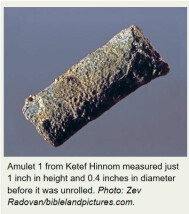 As the amulets from Ketef Hinnom contained small inscriptions that were not meant to be read, Smoak further considers in his article the significance of miniature writing:

Read Jeremy D. Smoak’s complete analysis of the ancient amulets’ miniature writing in “Words Unseen: The Power of Hidden Writing” in the January/February 2018 issue of BAR, and discover what these unique artifacts illuminate about religion in Iron Age Judah.

Read more articles like this at Biblical Archaeology Review