Modesty and Lust, Who's Responsible? 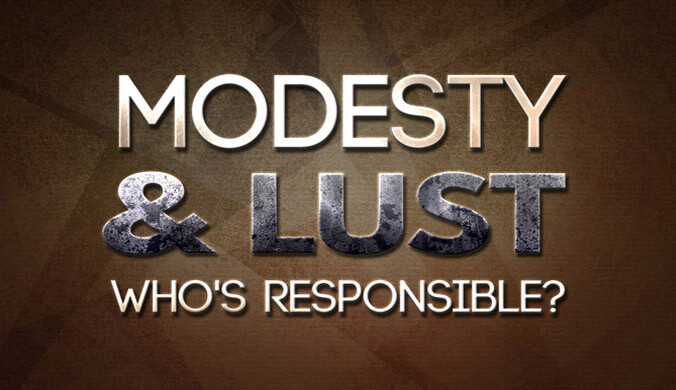 A member of our staff recently read an article about a blog post from a Christian woman who has decided to stop wearing leggings and yoga pants out in public. This is not the first time this topic has come up in the media, nor will it be the last, but we wanted to take a moment to look at modesty, lust, and responsibility.

The blogger stated:
“The conversation was about leggings and how when women wear them it creates a stronger attraction for a man to look at a woman’s body and may cause them to think lustful thoughts.”

This debate always causes tempers to flare and the gloves to come off as people are passionate about what they are “allowed” to wear, self-control, and the viewing of people as sexual objects. It’s not uncommon to see comments against women altering what they wear to be more modest so as not to entice men.

An example would be:
“women can wear whatever they want and that does NOT give a man the right by any means to look or stare. If she wants to do that then good for her, but it is her problem. The same goes for men, if there is a man with great abs and a woman looks then that is her problem, not his.”

Such a statement is not necessarily wrong. It is up to each individual how they respond. This is where the heart of the debate is, who should be responsible? So we need to see what Scripture tells us about modesty and lust.

1 Corinthians 12:22-25
On the contrary, the parts of the body that seem to be weaker are indispensable, and on those parts of the body that we think less honorable we bestow the greater honor, and our unpresentable parts are treated with greater modesty, which our more presentable parts do not require. But God has so composed the body, giving greater honor to the part that lacked it, that there may be no division in the body, but that the members may have the same care for one another.

1 Timothy 2:8-10
I desire then that in every place the men should pray, lifting holy hands without anger or quarreling; likewise also that women should adorn themselves in respectable apparel, with modesty and self-control, not with braided hair and gold or pearls or costly attire, but with what is proper for women who profess godliness—with good works.

In 1 Timothy 2 we see there is a place for modesty and it should be respectable apparel. 1 Corinthians 12 indicates there are presentable parts of our body and less presentable parts. Now that we have established a biblical precedence for modesty, what about lust and responsibility? Clearly from these verses people are responsible for how they dress. We find in Matthew 5:28 that lust has an intent attached to it, which means it is the responsibility of the one who may lust.

Matthew 5:28
But I say to you that everyone who looks at a woman with lustful intent has already committed adultery with her in his heart.

The simple conclusions to be drawn here is that modesty is a virtue our Creator wants in His people. Lust is something our flesh craves, desires, and does; we need to take every thought and desire captive. If we claim to be children of Yahweh, then we represent Him in all we do which includes our actions and dress. We need to be in control of ourselves.

It's an unfortunate but all-too-true reality that women wearing tights/leggings and yoga pants without a shirt, skirt, or shorts covering them, do create a temptation for men to "check 'em out". It is still up the man whether he "looks" or not...and it's completely up to him if he allowed the "look" to turn into lust and desire.

Should a woman HAVE to change how she dresses to make life "easier" for men? No, there's no commandment there. Is it wisdom and being a good role model to do so? Yes it is. We should, however, be mindful in how we represent our Elohim as we will answer for it in the end. This topic isn’t limited to just the way women dress, the inverse is true with the way men dress as well.

The primary difference being that men, in general, are more visually driven. We are not saying women don't lust after a good looking man with good abs, etc., but it's more common for men to be driven down the "lust" pathway based on visual stimulation than for women. This truth does not give men a license to lust after a woman, or even ogle one, but it is a reason for women claiming Yahweh, to be more mindful of male tendencies and the all-too-real struggle with sexual lust many men face daily. The author of the blog realizes this and has simply altered her behavior accordingly. She chooses not to wear leggings and yoga pants out in public; she still wears them at home around her family. Some persecute her because of this, some applaud her.

Where do you stand?

The article our employee read is located below, within the article is a link to the original blog post in question: