“Naboth the Jezreelite had a vineyard in Jezreel, beside the palace of King Ahab of Samaria. And Ahab said to Naboth, ‘Give me your vineyard, so that I may have it for a vegetable garden, because it is near my house; I will give you a better vineyard for it; or, if it seems good to you, I will give you its value in money.’ But Naboth said to Ahab, ‘The Lord forbid that I should give you my ancestral inheritance.’ Ahab went home resentful and sullen because of what Naboth the Jezreelite had said to him.”—1 Kings 21:1–4 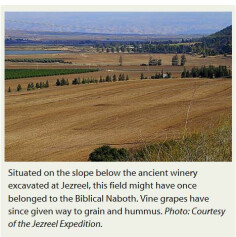 of events that led up to the tragic end of the Omride dynasty. What reads like an inconspicuous anecdote ultimately ends in a grim demise of a whole dynasty of Israelite kings when King Ahab’s wife, the infamous Queen Jezebel, interferes. We read that the queen had Naboth convicted on false charges of blasphemy and stoned to death.

Jezebel’s trickery may have given King Ahab the opportunity to seize Naboth’s vineyard, but then the prophet Elijah stepped in the story to prophesize the downfall of Ahab’s dynasty, pronouncing God’s sentence, “In the place where dogs licked up the blood of Naboth, dogs will also lick up your blood. […] Because you have sold yourself to do what is evil in the sight of the Lord, I will bring disaster on you; I will consume you, and will cut off from Ahab every male, bond or free, in Israel” (1 Kings 21:19–21).

King Ahab’s immediate repentance averted God’s anger from him personally, but the dynastic disaster was only postponed to occur “in his son’s days” (1 Kings 21:29). Ironically enough, we are told that Ahab’s son and successor, Joram, was killed in Jezreel, and his body thrown in Naboth’s vineyard, in fulfillment of Elijah’s prophecy (2 Kings 9).

To locate the general setting for the Biblical account of Naboth and King Ahab is not difficult, as the ancient site of Jezreel has been known and even gave its name to the entire valley. But, what more can we really find out about the place?

Archaeological exploration of the greater Jezreel has identified an Iron Age IIB (900–700 B.C.E.) military enclosure on the upper tell. The most recent excavations, headed by Norma Franklin of the University of Haifa and Jennie Ebeling of the University of Evansville, exposed an ancient winery. Cut into limestone bedrock at the foot of Tel Jezreel, this ancient winery complex sits in the vicinity of the military enclosure overlooking the fertile slope that belonged to the agricultural hinterland of ancient Jezreel. Is it possible that this winery was associated with the Biblical Naboth’s vineyard? Did the adjacent field once produce sweet grapes? 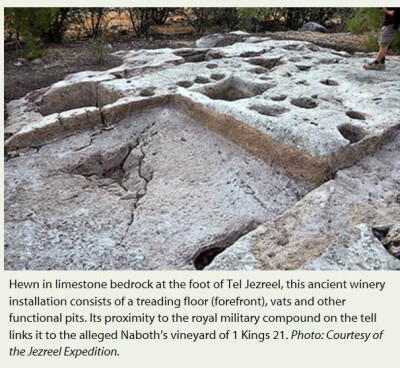 Hewn in limestone bedrock at the foot of Tel Jezreel, this ancient winery installation consists of a treading floor (forefront), vats and other functional pits. Its proximity to the royal military compound on the tell links it to the alleged Naboth’s vineyard of 1 Kings 21. Photo: Courtesy of the Jezreel Expedition.
The first clue to this question is the king’s palace that allegedly stood near the vineyard (and the ancient winery?). Although Biblical translations routinely speak of a “palace,” the Hebrew word heikal is better translated as “military structure,” which is precisely what archaeologists have discovered up on the hill just above the ancient winery at Tel Jezreel.

For the details on the newly excavated ancient winery at Jezreel and its possible connection to Naboth’s vineyard, read the article “Have We Found Naboth’s Vineyard at Jezreel?” by Norma Franklin, Jennie Ebeling, Philippe Guillaume and Deborah Appler in the November/December 2017 issue of Biblical Archaeology Review. In this article, the Jezreel excavators provide description of the winery and put forward literary and archaeological evidence suggesting that the Biblical Naboth and King Ahab once most likely drank from its fruits.