The Hebrew University of Jerusalem recently announced that dozens of bronze Jewish revolt coins from the First Jewish Revolt against Rome (66–70 C.E.) have been discovered in a cave just south of the Temple Mount in Jerusalem. The coins were found during the renewed Ophel excavations led by Hebrew University archaeologist Dr. Eilat Mazar following a four-year hiatus. 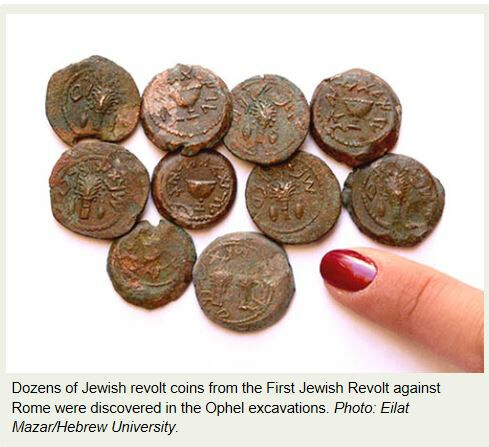 Mazar believes that the coins, which measure 0.6 inches in diameter, were left by Jewish residents who had fled and hid in the cave at the Ophel during the Roman siege of Jerusalem. The archaeologists also found in the cave fragments of jars and cooking pots, adding to the evidence of human habitation.

Some of the Jewish revolt coins from the Ophel excavations date to the beginning of the rebellion, but the majority, stamped with the inscription “Year Four,” are from the final year of the revolt. The Jewish rebels had also changed the formula on these “Year Four” coins so that in place of “For the Freedom of Zion,” the inscriptions read “For the Redemption of Zion.” The coins are adorned with Jewish symbols, including the four Biblical plant species associated with the holiday Sukkot—palm, myrtle, citron and willow—as well as the ceremonial goblet used in Temple service.

Interestingly enough, similar “Year Four” Jewish revolt coins were found by Mazar’s grandfather, Professor Benjamin Mazar, near Robinson’s Arch next to the Western Wall of the Temple Mount in an excavation following the Six-Day War in 1967.

The Ophel excavations yielded a number of incredible finds in prior seasons, including a horde of Byzantine-period gold coins, gold and silver jewelry, and a gold medallion featuring iconic Jewish motifs; the royal bulla (seal impression) of King Hezekiah; and—announced recently in BAR—a bulla that bears the name Isaiah and may have belonged to the Prophet Isaiah.

Watch Dr. Eilat Mazar describe the discovery of the Jewish revolt coins in the Ophel excavations.