After discovering a new Dead Sea Scroll text by conducting a CT scan on a phylactery from Qumran, Ariel University scholar Yonatan Adler began to look for additional tefillin texts. According to a Times of Israel article, Adler’s quest took him to the Dead Sea Scroll lab at the Israel Museum, where he discovered additional rolled up tefillin texts inside fragments of phylactery cases.
Noah Wiener   •  09/23/2016

The thousands of fragments of Biblical text that comprise the Dead Sea Scrolls have shed light on the origins of early Christian thought, the 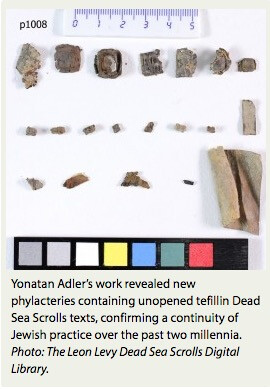 development of the Hebrew Bible and the history of Judaic beliefs from the third century B.C.E. to 70 C.E. Often considered the greatest archaeological find of the 20th century, the Dead Sea Scrolls have received intense academic scrutiny by archaeologists, religious scholars and epigraphers alike over the past 60 years. And yet nine small Dead Sea Scroll fragments managed to escape the attention of scholars—until now.

The scroll fragments were hidden in ancient phylacteries, or tefillin, which are small leather boxes containing scripts from the Jewish law that observant Jews wear on the forehead and arm during recitation of certain prayers. Dozens of tefillin scroll fragments containing excerpts from Exodus and Deuteronomy have been uncovered at Qumran, and some of the phylactery texts that have been opened include different spellings from the traditional Biblical text.

The extensive Dead Sea Scroll collection is undergoing a 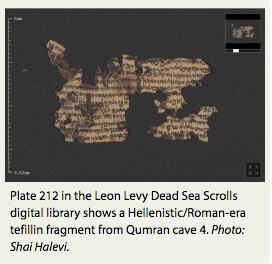 thorough imaging project, and once the new Dead Sea Scrolls discovered in the Qumran phylacteries have been unrolled, they will be translated and digitized before being preserved in climate-controlled environments. The process of unrolling a delicate Dead Sea Scroll can be complex, and similarly delicate techniques have been used to unroll other ancient rolled texts, including a gold leaf containing the ‘Shema Yisrael and the silver scrolls from Ketef Hinnom.

The Dead Sea Scrolls date from around 250 B.C. to 68 A.D. and were written in Hebrew, Aramaic and Greek; they contain Biblical and apocryphal works, prayers and legal texts and sectarian documents. While these new Qumran fragments are not likely to reshape our understanding of the Biblical text, the existence of phylacteries containing Biblical verses underscores two millennia of continuity in tefillin tradition.

Read more in The Times of Israel.