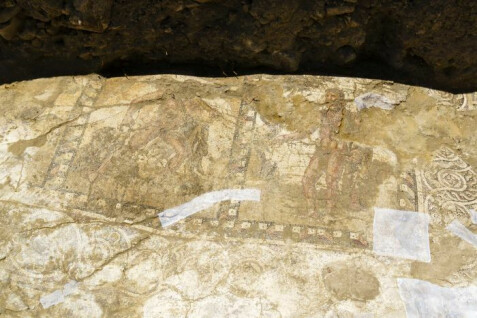 Photo: The rare mosaic is dated to the Roman Period (AFP: Iakovos Hatzistavrou)

A rare Roman mosaic has been uncovered in Cyprus during sewerage work on the eastern Mediterranean island.

Only part of the mosaic, measuring 19 metres long and seven metres wide, has been excavated in the southern coastal city of Larnaca and officials believe more is still buried.

"A preliminary estimation would suggest that scenes of the Labours of Hercules are depicted and that it is dated to the Roman period," the antiquities department said in a statement.

The 12 most famous feats of Hercules are collectively known as the Labours of Hercules, and included slaying the Nemean Lion and killing the Lerna Hydra, or water snake.

They concerned a penance carried out by Heracles, the greatest of the Greek heroes, whose name was later Romanised as Hercules. 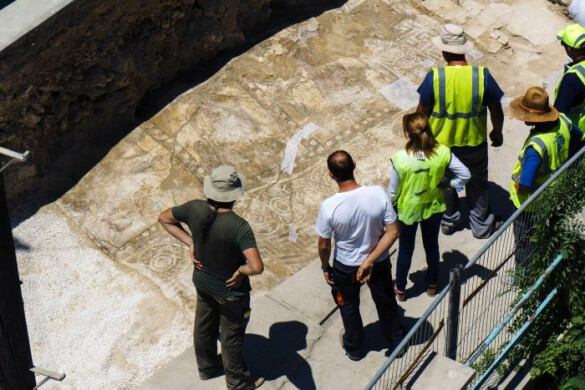 The antiquities department said the mosaic was evidence that Ancient Kition — on which modern Larnaca was built — played an important role in establishing Roman culture in Cyprus.

"However, up to this day Roman remains found in the city are very few," the antiquities department said.

"Therefore, the mosaic floor that came to light provides important evidence for the development of the city during the Roman period."

Cyprus was under the control of the Roman Empire from 31 BC until the 4th century AD.

Transport Minister Marios Demetriades, who visited the site in Larnaca, told reporters the department of antiquities, which falls under his ministry, planned to move the mosaic to a museum.

Mr Demetriades, who is also minister of works and communications, said the mosaic was important because "nothing similar has been discovered so far".

"The intention is to transfer it to a museum, to build a specific room [where it will be displayed]... because this is the best way to protect it," he said.

The eastern Mediterranean island is home to many antiquities and is rife with excavations, involving experts from several countries.