Scribes in the Dead Sea Scrolls

Looking at scribal figures at Qumran

What’s in the Dead Sea Scrolls? The scrolls, which date from the 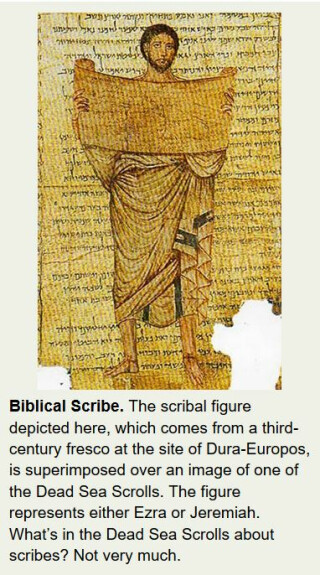 Pseudepigraphal texts—that is, religious texts that did not make it into the Hebrew Bible—from the Second Temple period (c. 530 B.C.E.–70 C.E.) comprise another 30 percent. The final 30 percent consists of texts written by a sectarian group, whom many associate with the Essenes, an ancient Jewish religious sect; these texts talk about the group’s beliefs and rules.

The majority of scribal figures we see in the Dead Sea Scrolls are renowned Biblical figures of the past, such as Enoch, David, and Ezra. However, there are a few characters who would have been contemporary to the writing of the scrolls. Charlotte Hempel, Professor of Hebrew Bible and Second Temple Judaism at the University of Birmingham, UK, analyzes two of them in her column: the Overseer (Hebrew: Mebaqqer) and the Sage (Maskil).

The Overseer “records misdemeanors reported to him” and “was also responsible for keeping a log of members’ possessions and the collection of monthly donations for those in need.” Thus, he functioned similarly to a bookkeeper.

The Sage was a complex figure with many responsibilities. Charlotte Hempel explains:

An impressive multitasker is the Maskil, often rendered in English as “the sage.” Most references to the figure of the Maskil refer to a particular office-holder. We get some rare glimpses of some of his (less likely her) job description as a spiritual leader in the Community Rule, where he is tasked with teaching the children of light about the children of humanity with regard to all the varieties of their spirits. Several compositions employ Maskil in headings, suggesting an affiliation of this office with the final editing or performance of compositions. … [His duties include] … causing fright in demons and other harmful spirits and creatures by enunciating God’s splendid glory. … The skillset of this enlightened figure and those responsible for the literature from Qumran reflects a broad spectrum of knowledge and scholarship.