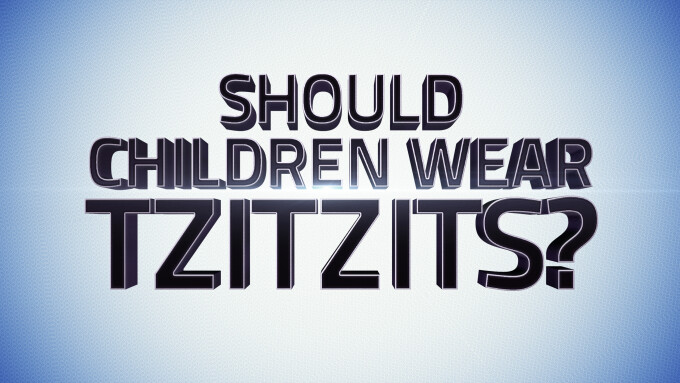 Tzitzits, or tassels, are one of the more hotly debated topics in the Hebrew Roots movement.  There are a number of points that people argue including how many knots or wraps are required, colors, length, if women should wear them, if anyone should wear them, or even if children can.

We cover the topic of if women can wear them and if there is a biblical requirement on how to make them in our teaching titled, “Should Women Wear Tzitzits?”  In this week’s blog we’re going to briefly cover the question on whether or not children should wear them.  But first, let’s read the Torah Commandment.

Numbers 15:38-40 (ESV)
“Speak to the people of Israel, and tell them to make tassels on the corners of their garments throughout their generations, and to put a cord of blue on the tassel of each corner. And it shall be a tassel for you to look at and remember all the commandments of the Lord, to do them, not to follow after your own heart and your own eyes, which you are inclined to whore after. So you shall remember and do all my commandments, and be holy to your God.

If you notice, there really isn’t much in the way of instructions.  We are to make tassels on the corners, or edges as the word in Hebrew can also mean that, of our garments and have a cord of blue in each one.  That’s it, pretty simple right?  So who is it that supposed to wear them?

“Speak to the people of Israel”

The King James Version translates the Hebrew word “ben” as children in the same place, among many others.  The phrase “children of Israel” as used in Numbers 15 and many other places relates to all of Israel, both male and female.  It also does not exclude the literal children.  There are some that argue that children should not wear tzitzits as they aren’t of the “age of accountability”.

The problem with that argument is that we’ve yet to see anywhere in Scripture that mentions a specific age at which people are accountable for their own actions and when they are not.   If we look at the Torah, what we find is that if someone breaks the Law of God, they are guilty, whether or not they are aware of it.  There are sacrifices for sins as described in Leviticus 4.  What seems to matter in terms of accountability, is being made aware of the sin.  Breaking the Law of God is always a sin, but awareness of it is what matters.  For example, verses 27-28.

Do you see it?  When the guilt is realized or the sin is made known to him.  There isn’t an age given, but an amount of knowledge and understanding of what occurred.   If we couple that with the commandment relating to wearing tzitzits and their purpose, we can easily answer the question about whether or not children should wear them.

Leviticus 15:39-40 (ESV)
And it shall be a tassel for you to look at and remember all the commandments of the Lord, to do them, not to follow after your own heart and your own eyes, which you are inclined to whore after.  So you shall remember and do all my commandments, and be holy to your God.

The purpose of wearing tzitzits is so that we can remember to keep all of the commandments of YHWH so that we may be a set apart, holy, people (verse 40).  Shouldn’t our children be given the same reminder?  As parents we are to teach them the Law of God; part of that Law is to wear tzitzits.  So then the question is sometimes asked, “should we force our children to wear them?”.

Proverbs 22:6 (ESV)
Train up a child in the way he should go; even when he is old he will not depart from it.

If we’ve explained to our children their purpose, and we’re teaching them that we are to follow YHWH, then it is our belief that we should make our children wear them also.  By doing so, we’re reinforcing the importance of wearing them.  As parents we need to practice what we are teaching them is right.  When we are wearing them because YHWH commands it and so they serve as a reminder for us be obedient, we are being an example for them to emulate.

If we choose not to have our children wearing tzitzit after teaching them their purpose and instead let them choose to not wear them, then we’re letting your children sin.  We’ll leave you with this thought from the Messiah relating to causing or allowing our children to sin.

Matthew 18:6 (ESV)
but whoever causes one of these little ones who believe in me to sin, it would be better for him to have a great millstone fastened around his neck and to be drowned in the depth of the sea.

Mark 9:42 (ESV)
“Whoever causes one of these little ones who believe in me to sin, it would be better for him if a great millstone were hung around his neck and he were thrown into the sea.

Luke 17:2 (ESV)
It would be better for him if a millstone were hung around his neck and he were cast into the sea than that he should cause one of these little ones to sin.

The word for “cause” in the Greek is skandalizō (G4624) and carries with it an indication of putting an obstacle or stumbling block or enticing one to sin.  If you tell a child they can’t have candy, but then you lay a piece out for them in their reach and walk away, which choice will most children make?  The same is true here.  The flesh doesn’t like to obey the Laws of God, if given the choice, how many children do you think would choose to obey if their parents did not make them?

We hope that this has blessed you.

Remember, continue to test everything.
Shalom

Tags: should children wear tzitzits, numbers 15:38-40, wearing tassels on our garments or clothing, training our children in the way they should go.
119 Blog