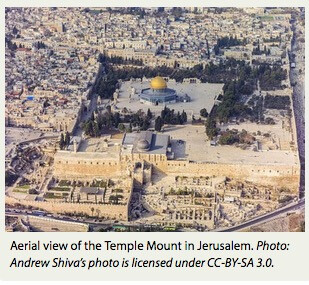 Preserved as a nearly rectangular man-made platform, the Temple Mount stretches 36 acres—equivalent to about 28 football fields. Located in the current Old City of Jerusalem, the site was where King Solomon built the First Temple in the 10th century B.C.E., where the Second Temple was erected in 516 B.C.E., and where King Herod rebuilt the Temple and expanded the Temple Mount in 19 B.C.E. The Temple Mount is the holiest site in Judaism.

The Temple Mount has been a Christian pilgrimage site since at least the fourth century C.E., when the Pilgrim of Bordeaux chronicled his journey through the Holy Land. The Jerusalem Temple is referenced several time in the New Testament—it is where Jesus drove out merchants and overturned the money-changers’ tables to cleanse the Temple (Mark 11:15–19; Matthew 21:12–17; Luke 19:45–48).

read the rest of the story at Biblical Archaeology