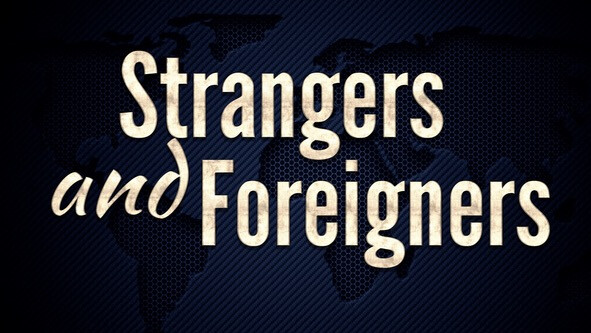 The context of every situation must be examined. There are times that the phrase foreigners, or sojourners applies to those who choose to follow the Creator and then other times when it refers to simply sojourners and foreigners, those who follow other gods, but are in the area as Israel.

Numbers 15 is an example of this; it has both sets of "foreigners"

We mentioned that both sets of "foreigners" were referenced here. By this we are referring to the fact that the sojourners have a choice. They can choose to serve the Creator, or they choose not to.

Does this make sense? So, now relating this to Deuteronomy 14:21, we see there are two peoples referred to, Israel, and the strangers or foreigners.

Those who choose to follow the Creator are to do as Israel does. However, those who choose not to follow the Creator, they are permitted to be given or sold the carcass of an animal that has died naturally.  It should be noted, the animals that can be given or sold, are still ones described as food; it would not be referring to swine, for example.  How do we know this?  The context.  Verse 21 clearly states you may not eat anything that has died naturally; this means that which is being sold or given away would have been permitted to be eaten by Israel if they killed it.

The strangers and the foreigners who wish to serve YHWH, must serve Him in the same way that the native-born Israelite does.  There is to be no distinction.  This makes perfect sense when we consider the grafting in of the gentiles.  For more on being grafted in, please see our teaching titled “Grafted In”, and we would also recommend reading Romans 11.  Someone who does not desire to be part of YHWH’s family would not follow His laws nor wish to be grafted in.  However, for those who wish to be part of the vine, for those who wish to be a “child of God”, they are to follow the same rules.  It doesn’t matter if they are Jew or Greek, male or female, slave or free (Galatians 3:28).  All who wish to serve YHWH are to serve Him the ways He stated for us to, through obedience to Him and His Word.  It is the same law for all of Israel whether native-born or a foreigner or sojourner who wishes to serve YHWH.

The way we serve the Creator doesn’t change because of our genetics.  The way we serve YHWH is based upon His Word.  He does not care who you have been or where you have come from.  He doesn’t care what you have done in the past.  Look at Ruth, she was a Moabite woman.  The Moabites were a people YHWH says will be destroyed (Jeremiah 48:42), yet Ruth was permitted to not only become part of Israel, but to be part of the lineage of the Messiah!  Why?  Because she chose to become part of Yahweh’s people.  She chose to serve Yahweh

Ruth 1:16
But Ruth replied, “Don’t urge me to leave you or to turn back from you. Where you go I will go, and where you stay I will stay. Your people will be my people and your God my God.”

If you choose to be a child of YHWH, you must repent from your sin, turn from doing things your own way and instead do them His way.  Through the sacrifice of Messiah, the whole world may receive eternal life.  This includes the foreigner and sojourner, but only if they desire to follow YHWH.  If they do, then they have the same rules to follow as everyone else does who is a child of YHWH and claim His name.  Likewise, they receive the same rewards as everyone else does.

Romans 10:12-13
For there is no difference between Jew and Gentile — the same Lord is Lord of all and richly blesses all who call on him, for, “Everyone who calls on the name of the Lord will be saved.”

A sojourner or foreigner who does not choose YHWH remains “of the nations”, a gentile.  They are not grafted in and they will not receive salvation because they will not receive grace by faith in Messiah.  Those who choose to reject the Creator will not follow what YHWH says; they will not do the things He says in order to serve Him.  They will do things their own way.  In the end, their “reward” for their rejection of the Creator will be eternal death, not eternal life because they have turned their back on the Creator and rejected His Word which is rejecting Him.

Be like Joshua and choose today whom you will serve.  Will you serve Yahweh, the Creator of the universe and thus choose to do things His way?  Or, will you turn your back on the Creator and go your own way, the way of man and the world?

For more on being Grafted In please see the teaching below: