In the Bible, King Hiram of Tyre supplies King Solomon with timber, craftsmen and gold for the construction of the Jerusalem Temple, and the alliance with the Phoenician ruler undoubtedly helped 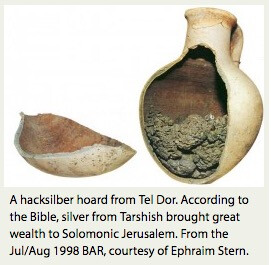 Solomon amass his extraordinary wealth. Biblical and other ancient texts suggest that the seafaring Phoenicians brought silver and other precious metals from the western Mediterranean in the 10th century B.C.E., the time of Hiram and Solomon, and archaeology has revealed numerous Phoenician mercantile colonies across the Mediterranean dating to the first millennium B.C.E.

Did the Phoenicians trade in the western Mediterranean before establishing these colonies? Where is Tarshish, the Biblical source of the Phoenician silver trade? A Hacksilber Project study published by Christine M. Thompson and Sheldon Skaggs in Internet Archaeology points to Spain and Sardinia as the Biblical world’s source of silver in the 10th century B.C.E., lending scientific credence to textual associations between Biblical Tarshish and modern Sardinia.

The researchers’ lead isotope analyses provide ore-provenance data on the Phoenician silver hoards, corroborating textual records of a Phoenician silver trade in the western Mediterranean before their colonial endeavors. The authors of the study collected samples from 48 silver artifacts from Akko, Dor, Ein Hogez and Tell Keisan in southern Phoenicia—identified as the “Cisjordan Corpus” of Iron Age hacksilber hoards—all of which date between 1200 and 800 B.C.E. Longtime Tel Dor excavation director Ephraim Stern described the Dor hoard in BAR in 1998:

The Hacksilber Project researchers describe the Cisjordan Corpus as “the largest identified concentration of pre-coinage silver hoards in the ancient Near East, and all of the silver in them is necessarily related to inter-regional trade.” The lead isotope data “substantiate both Sardinia and Spain as candidates for Tarshish.” In order to identify Tarshish, the researchers turned to the text.

is mentioned in ancient Near Eastern and classical texts. The Phoenician text on Sardinia’s ninth-century Nora Stone begins with the words “at Tarshish,” leading many scholars (including the fragment’s esteemed translator, Frank Moore Cross) to associate the island with the Biblical site. In the 1990 BAR excavation report “Searching for the Phoenicians in Sardinia,” Joan G. Scheuer describes Cross’s analysis of the stone:

There Frank Cross showed us the Nora Stone with its famous inscription. Found in 1773, on Sardinia’s southern coast, at the site of Nora—a Roman city built, like Tharros, over an earlier Phoenician-Punic settlement—the Nora Stone is a slab of stone, called a stela, 3.5 feet high and nearly 2 feet wide, on which there is an eight-line inscription.

Cross believes the top of the stela has been broken off and that two lines from the top of the stela are missing. The Semitic letters are incised in Phoenician style. Based on an analysis of the letters’ shape and stance, Cross has concluded that the Nora Stone was inscribed in the second half of the ninth century B.C. His reading of the inscription supports the idea of a Phoenician presence in Sardinia as early as the ninth century B.C. According to Cross, the two missing lines told that Phoenicians fought with the local Sardinians. The inscription begins with the words “at Tarshish,” perhaps a reference to the place where the battle may have occurred…

Cross thinks that the Tarshish of the Nora Stone was probably a metal-refining town in Sardinia, since the Semitic root means “to smelt.” There were, in fact, many places known as “Tharsis” or “Tarsis” or “Tharros” or “Tarshish” in the ancient world. Other scholars, too, have noted that these places take their names from the Semitic root—that they were the “Smelt-towns” of the ancient world.

Thompson and Skaggs’s analyses provide the first archaeometric source data corroborating Cross’s association between Sardinia and Tarsish. While they cautiously state that “the evidence at hand does not compel us to believe that Solomon actually made silver as common in Jerusalem as stones, or that trips to Tarshish were as politically subordinated as they sometimes appear in Biblical sources,” the hacksilber studies do expand our understanding of the development of the Phoenician mercantile system, Iron Age trade networks and the wealth of Solomon in the Bible.