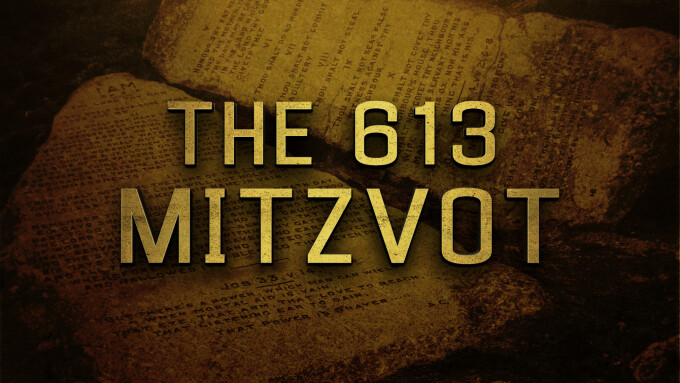 We are often asked to do teachings on the 613 commandments found in the Jewish faith.  Understandably, such a teaching or teaching series would be an immense undertaking.  However, we thought we may be able to go through it, at least in part, in our blogs.  This is an ongoing blog series that we will do at different times without any real schedule planned.  We will not be going into great depth in this series.

The format for these blog posts will be simple.  We will cite a traditional rabbinic commandment as found in the AENT (Aramaic-English New Testament), provide the Scripture that it is supposed to be based from, indicate if we agree that it is a commandment we can do today or if it is one that cannot apply today and then why or why not.  Then we will give a few notes or thoughts as to why believe it can or cannot be applied today.  Last time we looked at the first five, this week we will take a brief look at five more.

Commandment: On Studying and Teaching Torah

Notes:
We agree this is something that should be, and can be done today. Just as with the previous commandment from last week’s post, we believe that we should always be mindful of His commandments in all that we think and do from the time we lie down until the time we rise.  In the same way, we should be teaching our children to live and be the same; always mindful of the commandments of the Creator in all that they think and do.

Commandment: On Binding a Tefillin on the head

Deuteronomy 6:8 (ESV)
You shall bind them as a sign on your hand, and they shall be as frontlets between your eyes.

Notes:
We agree with this and believe it still applies to us today.  However, we believe that the binding on the head and hands is symbolic. The commandment commands all commandments of YHWH to be written on the hands and forehead. If this was literal, even tefillin (little boxes with the Shema) would not even satisfy this commandment. All of the commandments cannot literally be written on our foreheads and hands because they would not fit. In the first century, some Jewish sects (Pharisees) applied this literally because of the oral law (Tradition of the Elders - see Mark 7). They would put the Shema in the box as a summary of all of the commandments. The actual meaning behind this commandment is for us to keep his commandments in our mind (forehead) so that we will do His commandments in our behavior (hand). This is a metaphorical teaching tool of the Shema (hear and do).

Commandment: On Binding a Tefillin on the hand

Deuteronomy 6:8 (ESV)
You shall bind them as a sign on your hand, and they shall be as frontlets between your eyes.

Notes:
We disagree with this as a literal commandment to be followed.  We view this the same binding the tefillin on the head as described above.

Commandment: On making Tzitzits with a thread of blue

Numbers 15:38 (ESV)
“Speak to the people of Israel, and tell them to make tassels on the corners of their garments throughout their generations, and to put a cord of blue on the tassel of each corner.”

Notes:
Tzitzit (tassels) are to be worn on our clothing to remind us to remember (keep in our minds) His commandments. The commandment is for the "children of Israel" Some interpret this as being for only men. This would imply that YHWH only offered this to men as a tool to help remember His commandments. In other verses "children of Israel" applies to both men and women. We believe the understanding that it only applies to men and not women is simply tradition and in error.  For more on this, please see our teaching titled “Should Women Wear Tzitzits”.

Jews today often do not have a blue thread in their tzitzits. The reason, as best we understand it, is in error. Their "oral law" (tradition of the elders) requires the blue die to come from an extinct or rare snail, thus they claim they cannot make the blue thread.

However, God's law does not require a specific type of blue (indigo works just fine). This would be an example of "nullifying the law of Moses because of the tradition of the elders" that Yeshua teaches on in Mark 7. Prayer shawls with tzitzits on them came out of Jewish persecution. They would not wear their tzitzits as commanded because they could be easily identified as Jewish. They would instead cover their heads (Babylonian / sun god practice in origin) with tzitzits attached to them when praying. The word often translated as "corners" can also be translated as "edges" or "extremities" of our garments. Because of this, today, many often attach their tzitzits to their jeans or pants belt loops.

Commandment: On Affixing a Mezuzah to Doorposts and Gates

Deuteronomy 6:9 (ESV)
You shall write them on the doorposts of your house and on your gates.

Notes:
Similar to binding to the head and forehead, this is likely symbolic. It is common for Jewish practice to install a "mezuzah" to the doorpost(s) of a home which has the Shema inside of it (similar concept to the tefillin). Once again, the commandment requires all of YHWH's commandments to be written on (not in a box) the doorpost and gates. This commandment cannot be taken literally, though the "mezuzah" is a nice tradition and practice. The idea is to remember God's commandments as you leave home and go out into the world, and when you come home to remember to bring them back into the home. According to God's commandments the elders of a city are to reside at the city gates to rule and judge over matters. This is the intent of the "gates" aspect of this commandment. In matters of judging and ruling, we are to do such things in accordance to God's commandments.

We hope this has helped bring a little clarity to the second set of 5 commandments and their applicability to our lives today.  Aside from ourselves, keeping the cultural understanding and Scriptural context are our greatest obstacle to understanding, and thus obeying, the ways of our Creator.  Each day we must choose whether to obey or disobey thereby choosing whom we are serving.