The “Original” Bible and the Dead Sea Scrolls

Can the scrolls help expose the original Bible language within the Masoretic Text and Septuagint? 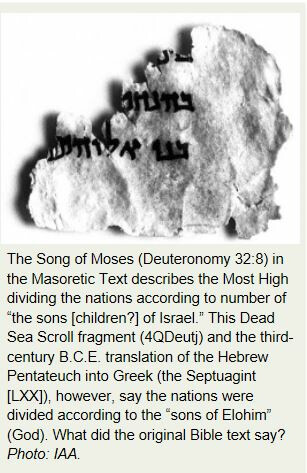 original language of the Bible: the Masoretic Text and the Septuagint. The Masoretic Text is a traditional Hebrew text finalized by Jewish scholars around 1000 C.E. The Septuagint is a Greek translation of the Torah created by the Jews of Alexandria in the third century B.C.E. (The other books of the Hebrew Bible were translated over the course of the following century.) According to Septuagint tradition, at least 70 isolated ancient scholars came up with identical Greek translations of the Torah.

Which is the “original” Bible? How do we decide which of these two ancient texts is more authoritative? In “Searching for the ‘Original’ Bible” in the July/August 2014 issue of Biblical Archaeology Review, Hebrew University of Jerusalem scholar and long-time editor-in-chief of the Dead Sea Scrolls publication team Emanuel Tov suggests we turn to the Dead Sea Scrolls to help us compare the Masoretic Text and the Septuagint. 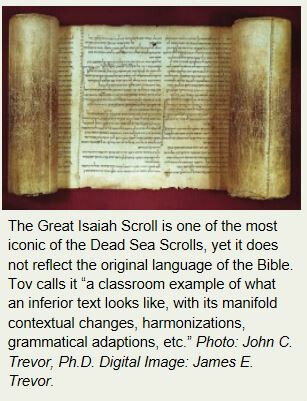 Some turn to the Dead Sea Scrolls simply because they are older: 2,000-year-old texts were less likely to be subjected to scribal corruption, implying that they reflect a more original Bible language. Tov supplements this chronological reasoning with a logical—and admittedly subjective—approach: He examines which text makes the most sense in a given context. Tov examines a number of textual discrepancies between Bible versions (Did God finish work on the sixth or seventh day before resting on the seventh day? How were the nations divided according to the number of the sons of God?) in his search for the original Bible.As an example, Tov asks: Did Hannah bring one bull or three bulls as an offering at Shiloh? (1 Samuel 1:24): 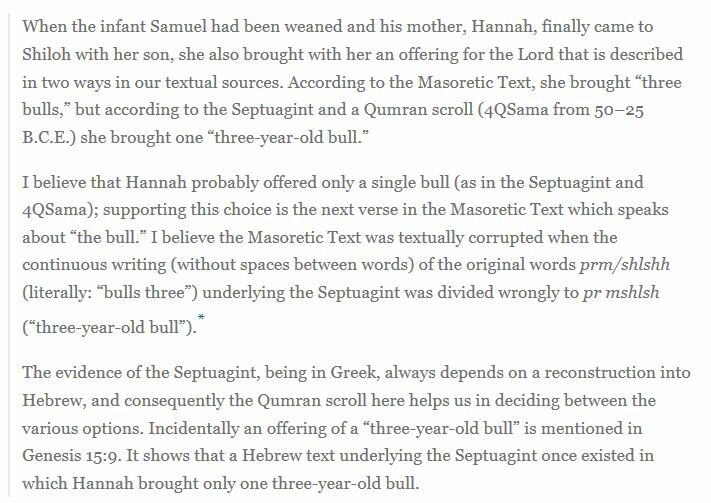 Tov uses the Dead Sea Scrolls to elucidate the original language of the Bible not only because they are the oldest Bible manuscripts, but also because they provide additional logical clues. He concludes: “In finding our way in the labyrinth of textual sources of the Bible, we must slowly accumulate experience and intuition. When maneuvering among the sources, we will find much help in the Dead Sea Scrolls. But they must be used judiciously.”