The Tel Dan Inscription: The First Historical Evidence of King David from the Bible 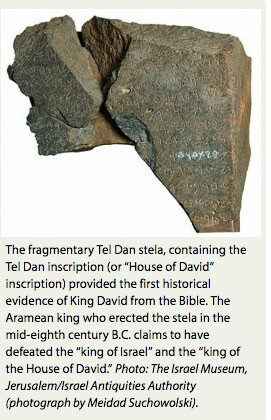 Few modern Biblical archaeology discoveries have caused as much excitement as the Tel Dan inscription—writing on a ninth-century B.C. stone slab (or stela) that furnished the first historical evidence of King David from the Bible.

The Tel Dan inscription, or “House of David” inscription, was discovered in 1993 at the site of Tel Dan in northern Israel in an excavation directed by Israeli archaeologist Avraham Biran.

The broken and fragmentary inscription commemorates the victory of an Aramean king over his two southern neighbors: the “king of Israel” and the “king of the House of David.” In the carefully incised text written in neat Aramaic characters, the Aramean king boasts that he, under the divine guidance of the god Hadad, vanquished several thousand Israelite and Judahite horsemen and charioteers before personally dispatching both of his royal opponents. Unfortunately, the recovered fragments of the “House of David” inscription do not preserve the names of the specific kings involved in this brutal encounter, but most scholars believe the stela recounts a campaign of Hazael of Damascus in which he defeated both Jehoram of Israel and Ahaziah of Judah.

What made the Tel Dan inscription one of the most exciting Biblical archaeology discoveries for scholars and the broader public was its unprecedented reference to the “House of David.” The stela’s fragmented inscription, first read and translated by the renowned epigrapher Joseph Naveh, proved that King David from the Bible was a genuine historical figure and not simply the fantastic literary creation of later Biblical writers and editors. Perhaps more important, the stela, set up by one of ancient Israel’s fiercest enemies more than a century after David’s death, still recognized David as the founder of the kingdom of Judah.

The “House of David” inscription had its skeptics, however, especially the so-called Biblical minimalists, who attempted to dismiss the “House of David” reading as implausible and even sensationalistic. In a famous BAR article, Philip Davies argued that the Hebrew term bytdwd referred to a specific place (akin to bytlhm for Bethlehem) rather than the ancestral dynasty of David. Such skepticism aside, however, most Biblical scholars and archaeologists readily accepted that the Tel Dan stela had supplied the first concrete proof of a historical King David from the Bible, making it one of the top Biblical archaeology discoveries reported in BAR.

Even though the “House of David” inscription has confirmed the essential historicity of King David from the Bible, scholars have reached little consensus about the nature and extent of his rule. Was David the great king of Biblical lore who founded his royal capital at Jerusalem and established an Israelite kingdom? Or was David a ruler of only a tribal chiefdom, as Israel Finkelstein of Tel Aviv University contends? Questions like these often arise from Biblical archaeology discoveries and lie at the heart of the complex relationships among archaeology, history and the Bible.