What Is the Oldest Hebrew Bible?

What is the oldest Hebrew Bible? That is a complicated question. The 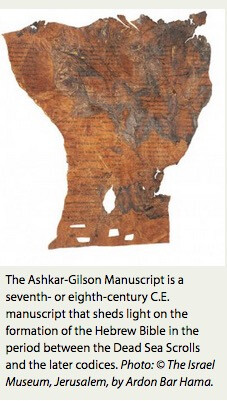 Dead Sea Scrolls are fragments of the oldest Hebrew Bible text, while the Aleppo Codex and the Leningrad Codex are the oldest complete versions, written by the Masoretes in the 10th and 11th centuries, respectively. The Ashkar-Gilson Manuscript falls in between the early scrolls and the later codices.

In “Missing Link in Hebrew Bible Formation” in the November/December 2015 issue of Biblical Archaeology Review, Biblical scholar Paul Sanders discusses the role the Ashkar-Gilson Manuscipt had in bridging the gap between the Dead Sea Scrolls and the later Aleppo Codex and Leningrad Codex.

While the Aleppo Codex is the oldest Hebrew Bible, the Leningrad Codex is the oldest complete Hebrew Bible. The Leningrad Codex dates to 1008 C.E. The scribe who penned the Leningrad Codex actually identified himself in two colophons (an inscription containing the title, the scribe’s or printer’s name, and the date and place of composition) at the beginning and end of the text as Samuel ben Jacob, or Samuel son of Jacob. The colophons also identify the place written (Cairo), the person who commissioned it (Mevorak son of Nathaniel) as well as further sale and donation details.

The Ashkar-Gilson Manuscript was purchased by Fuad Ashkar and Albert Gilson (hence the name Ashkar-Gilson) from an antiquities dealer in Beirut, Lebanon in 1972, and some years later, they donated it to Duke University in North Carolina. Based on carbon-14 dating and paleographic analysis, the Ashkar-Gilson Manuscript was dated to sometime between the seventh and eighth centuries C.E., right at the tail end of the so-called “silent era”— an almost 600-year period from the third through eighth centuries, or the time between the oldest Hebrew Bible fragments (the Dead Sea Scrolls) and the oldest complete Hebrew Bible authoritative Masoretic codices.

Was the Ashkar-Gilson Manuscipt the source of the later, authoritative Masoretic traditions? For the answer to this question and more, read the full article “Missing Link in Hebrew Bible Formation” by Paul Sanders as it appears in the November/December 2015 issue of BAR.