What language(s) did the Philistines speak?

The evidence that we have for the language(s) spoken by the Philistines is not plentiful, but what we do have is interesting (though far from conclusive). Two types of evidence predominate: (1) inscriptions that may have been produced by Philistines, and (2) Philistine words and names borrowed into other languages of the region and recorded (however imperfectly) in non-Philistine records.

In terms of the first type of evidence—inscriptions that may have been produced by the Philistines—some of the earliest examples cannot be read, such the inscription on a fragment of an Iron Age I clay tablet from Aphek (in an unknown script), or the inscription on an Iron Age I ostracon from Ashkelon (in what may be the Cypro-Minoan script, which remains undeciphered). Even if the identification of the latter script is correct, we can draw no conclusions about the language behind the inscription, as scripts can be used to write in different languages, just as the Roman alphabet is now used to write in many languages. 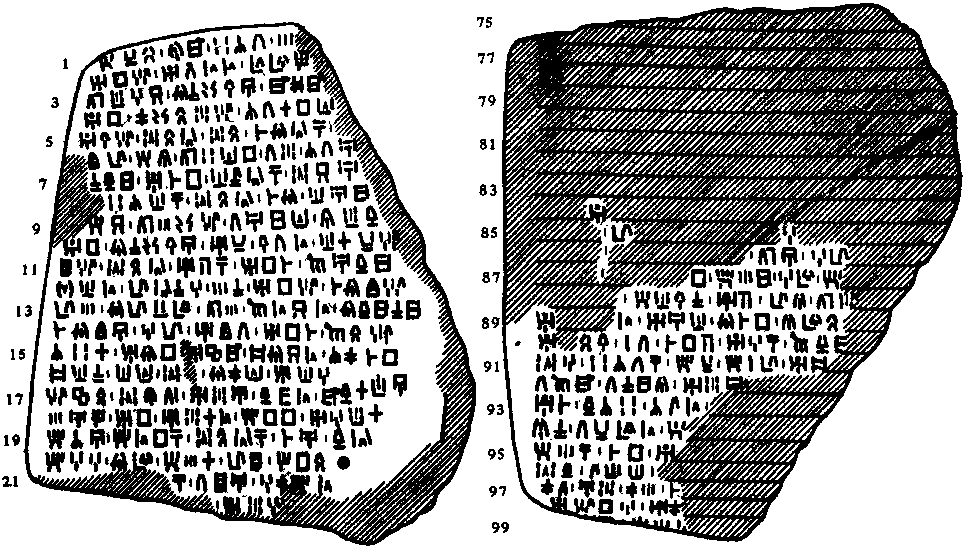 The majority of inscriptions that come from Philistine sites, though, are written in variants of the Semitic alphabet, beginning in late Iron Age I or early IIA. Many of these inscriptions contain words that are almost certainly personal names. Some of these names are Semitic, while many are clearly not; however, the fact that vowels are not expressed in the Semitic alphabet means that the original pronunciations of the non-Semitic names remain unknown, making it very difficult to identify which language(s) these names might be reflecting. Scholars have offered several suggestions, some Indo-European (e.g., Greek, Lydian, Luvian, Old Iranian) and some not (e.g., Kassite), but we so far have no convincing proof of the accuracy of any of these suggestions.

Meanwhile, whenever these inscriptions contain intelligible phrases or sentences, the language being written is a local Semitic one; thus if the Philistines did originally speak one or more non-Semitic languages, these languages do not appear to have survived past Iron Age I, and we have no examples of them in a script that can actually be read.

In terms of the second type of evidence—Philistine words and names recorded in non-Philistine records—the situation more or less parallels the situation with the inscriptions. Some names are Semitic (e.g., Ahimelech, Dagon) while others are not (e.g., Goliath, Achish). There are also some non-Semitic terms, such as the title seren for a Philistine leader. In some cases, we can tentatively cross-correlate some of these names and terms with known inscriptions. For example:

There are two striking things about these connections: (1) they point back to several different cultures, not just one, and (2) the majority of non-Semitic Philistine names in the inscriptions do not appear to be from any of these cultures (i.e., they appear neither Greek nor Anatolian), and thus seem likely to be from some other culture(s) entirely. Interestingly, this indication that Philistine names and terms had their origins in many different cultures is parallelled by recent archaeology at Philistine sites, which has been showing that the formation of the Philistines was a much more complex and multicultural process than the traditional view of the Philistines as a homogenous bloc of migrants from the Aegean.

So then… what language(s) did the Philistines speak? At the moment, the answer is: they spoke a local Semitic language from about the 10th c. onwards, but before that… we simply don’t know, as the evidence is still far from clear. Thus, for the time being, the wisest course of action is to avoid jumping to conclusions about the nature of early Philistine language(s) until we have much more data than we do now.