Where Did Jesus Turn Water into Wine?

Jesus’ first miracle was performed in Cana of Galilee. When the 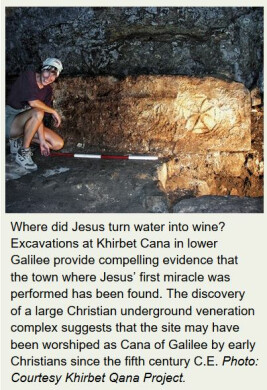 wedding party in Cana ran out of wine, Jesus commanded the servants to fill up six stone jars with water. After he is offered a cup from one of the jars, the chief steward of the wedding discovers that he is drinking wine (John 2:1–11).

Where did Jesus turn water into wine? Where is Cana of Galilee? There are at least five candidates for Cana in the Bible, but, according to archaeologist Tom McCollough in “Searching for Cana: Where Jesus Turned Water into Wine” in the November/December 2015 issue of BAR, only one site offers the most compelling evidence.

Nine miles from Nazareth lies the site of Khirbet Cana (or Khirbet Qana—“the ruins of Cana”) in lower Galilee. Excavations at Khirbet Cana began in 1998 under the direction of the late Douglas Edwards. BAR author Tom McCollough joined the project as field director in 2000 and became codirector in 2008. Several factors have led McCollough to believe that the Bible’s Cana of Galilee, where Jesus’ first miracle was performed, has been found.

Archaeological work has revealed that Khirbet Cana was a modest, well-connected Jewish village in the Hellenistic and Roman periods (323 B.C.E.–324 C.E.). Khirbet Cana’s Jewish identity has been confirmed by the discovery of a Roman-period synagogue, several miqva’ot (Jewish ritual baths), six Maccabean coins and an ostracon incised with Hebrew letters.

Khirbet Cana was thus indeed a vibrant Jewish village in antiquity, but was it Cana of Galilee from the Bible? Christians in the Byzantine period seemed to think so. Perhaps the most persuasive evidence that early Christians identified Khirbet Cana with New Testament Cana is the large Christian underground veneration complex discovered by the archaeological team at the end of the first excavation season.

An extensive underground exploration revealed that at least four caves comprise the cave complex. The first cave, which has been excavated, was lined with plaster dating from the Byzantine through the Crusader periods (415–1217 C.E.). Greek graffiti scrawled on the walls of the caves record the presence of Christian pilgrims: some read “Kyrie Iesou” (“Lord Jesus”), some depict crosses and some seem to record pilgrims’ names.

Even more fascinating, the archaeologists found in this first cave what may be an altar: A sarcophagus lid (see image above) inscribed with Maltese-style crosses had been turned on its side to serve as a kind of altar, its top edge worn smooth, perhaps by pilgrims who placed their hands on it during prayer. Above the “altar,” a shelf with two stone vessels had been found.

“There was space for another four,” writes BAR author Tom McCollough. “Six stone jars would have held the water that Jesus turned into wine (John 2:6). All this suggests that Khirbet Cana was regarded as New Testament Cana from a very early time.”

As mentioned earlier, there are at least four other candidates for the Bible’s Cana of Galilee. Khirbet Cana, in fact, is not even the site most visited by tourists today. So why does McCollough believe Khirbet Cana is the best candidate for New Testament Cana? Learn more about the evidence supporting Khirbet Cana’s identification with the site of Jesus’ first miracle and the reasons why the other candidates’ identifications don’t hold water by reading the full article “Searching for Cana: Where Jesus Turned Water into Wine” by Tom McCollough in the November/December 2015 issue of BAR.