Who Were the Essenes?

What social archaeology tells us about the Essenes of Qumran

A recent study has sought to determine by sophisticated methods whether Khirbet Qumran was home to a Qumran community of sectarian Jews, the Essenes of Qumran.

The study by Eyal Regev of Bar-Ilan University examines the architectural plan of Qumran and applies so-called “access analysis” to map the site’s spatial organization in order to uncover the social ideology of the Essenes of Qumran.

Regev characterizes this approach to studying the Qumran community as social archaeology, “now an established field of research which uses archaeological records to reconstruct the belief system and social organization of past societies.” 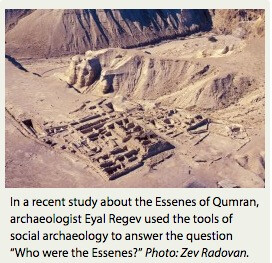 By physically dividing up and demarcating spaces—walls, doorways and entrances that are used on an everyday basis—the architecture thereby classifies and controls the movement of people and the spaces they inhabit. Studying these spaces can help archaeologists answer the question “Who were the Essenes?”

In a detailed analysis of the physical spaces of the Qumran community, Regev finds the occupied area is divided into different space segments, “each connected to a controlling central passage with minimal connections between segments.” The spaces within segments are also “minimally connected.” Access to most spaces is therefore “limited, and several boundaries must be crossed to reach most spaces from any starting point on the site.”

The large rooms (such as the dining room and the so-called scriptorium) used by the Essenes of Qumran “were not easily accessible and were out of view of casual entrants.” This, says Regev, means that “social encounters between the inhabitants were quite uncommon.”

The organization of space at Qumran thus “reflects sectarian organization and ideology.” Moreover, all this is consistent with the ideology of the famous Community Rule, one of the original intact scrolls. While this does not prove that the sectarian Qumran community was Essene, together with much other evidence, both from the architecture and the finds from the excavation, the Essene identification, says Regev, is “extremely plausible.”