Why the Pope is Wrong About the Death Penalty 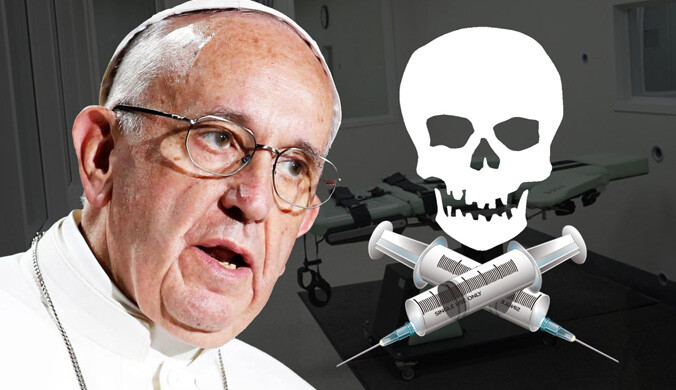 However, most believers—even if they think the governments in the Western World shouldn’t practice it today—would still agree that the death penalty is a morally appropriate means of punishment for certain crimes, and that it was instituted by God. Indeed, to call the death penalty universally “inadmissible” and an “attack” on human dignity is to place yourself above God as a moral authority. The Pope’s personal feelings do not change God’s mind on the matter.

Whoever sheds the blood of man, by man shall his blood be shed, for God made man in his own image. (Genesis 9:6)

From a biblical perspective, the death penalty reflects the dignity of the innocent life that was taken. At times, it is the only punishment that truly fits the crime.

Some might object, “But God commands us not to murder!” This is true, but the death penalty does not qualify as murder by definition. God gave authority to the governing body of a nation to administer the death penalty (e.g. Deuteronomy 17:8-12), and therefore it is a just means of punishment for certain capital offenses. Regular citizens, of course, are not given such authority.

Another objection is that something changed in the New Testament. It’s sometimes asserted that Jesus abolished the death penalty. However, that doesn’t appear to be the case. Yeshua affirmed the validity of the death penalty as part of the Torah in Matthew 5:17-20 when He said that He did not come to abolish the Law and that every “iota and dot” remains binding and authoritative. He even affirms the validity of the death penalty directly in Matthew 15:3-4 (quoting Exodus 21:17) when He says, “Whoever reviles father or mother must surely die.”

Furthermore, Paul likewise affirmed the validity of the death penalty in Acts 25:10-11. He said that if the charges against him were true, he was willing to be executed. He pled innocent to the charges, but the fact remains that he acknowledged that certain crimes, if proven true, warranted the death penalty.

What are Pope Francis’ reasons for taking this stance? How does he justify his moral opposition to the death penalty, which runs contrary to the Bible as well as Christian tradition over the past 2,000 years? This is what he said:

“More effective systems of detention have been developed, which ensure the due protection of citizens but, at the same time, do not definitively deprive the guilty of the possibility of redemption.”

In other words, since better prison systems have been developed, which ensure the safety of the general public, execution is an attack on the offender’s human dignity and it deprives him of his opportunity to repent.

Here are some responses to this argument:

1) Regarding better prison systems—while that’s true in the Western World, it doesn’t hold true for the whole world. Many of the prison systems in other parts of the world, especially in third world countries, are in absolutely terrible condition, even inhumane in some cases! Therefore, this is not a good basis for declaring that the death penalty is inadmissible.

2) The Pope needs to explain how forcing someone to rot in prison for the rest of their life respects their human dignity more than execution. What if a twenty-year-old man rapes and murders a little girl and is therefore sentenced to life in prison? It could be argued that execution respects that criminal’s human dignity far more than having them waste away for entire decades in a prison cell.

3) Regarding depriving a criminal of his opportunity for redemption—an argument could be made that someone is far more likely to repent and receive the Lord when they know they will be executed on a certain date than if they are left to go insane in seemingly never-ending solitary confinement.

In conclusion, the Pope’s reasons for his edict are incredibly flawed. His personal opinions on the death penalty do not change God’s mind. While it’s fine for believers to disagree, for various reasons, about whether the death penalty ought to be used in the Western World today, to call the death penalty morally inadmissible in all cases and an attack on human dignity is simply wrong and unbiblical.

For more information on the death penalty in the Bible and to get answers regarding difficult questions about certain capital offenses in the Torah, please see our teaching, Should We Stone Our Children?