Yeshua: God with us, the Everlasting Father and a Mighty God 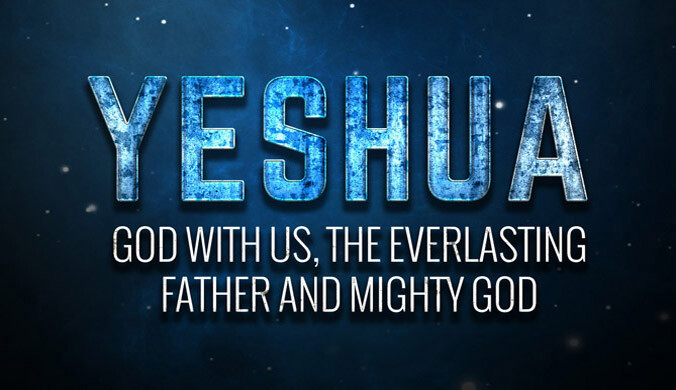 Yeshua was given many names in the bible, not the least of which were Emmanuel, Everlasting (or Eternal) Father, and Mighty God.  Was He all of these things?  How could He be both the man Yeshua and the Everlasting Father, Mighty God?  By delving deeper into the Scripture we find He was all of those, but maybe not the way it is commonly understood.

How is Yeshua, “God with us”?
Emmanuel, also spelled Immanuel, is a name given to the Messiah in Isaiah 7:14, meaning “God with us”.  Many in the Christian church have likely sung songs to praise the Messiah, calling Him Emmanuel, in fact the female Christian Artist Amy Grant popularized a song by that name in the 1980s.  Yet the meaning of the name itself may lead one to wonder how it was that God was with us when the Messiah was born.  John 1:1 tells us that the Word was God and that the Word became flesh.  This flesh we know to be Yeshua the Messiah, the living Word of God.   Yeshua is the Word of God as He lived/walked it out perfectly while on earth in the flesh.  As the living Word of God, Yeshua was God; he was a perfect image of the Father doing and saying only what the Father did and said.  In this way, Yeshua truly was God with us on earth, Emmanuel/Immanuel.

To delve a bit further, we can look at the name, “Immanuel”.  The name is made up of 3 separate words: “im” (which means with), “anu” (which means us), and “el” (which means God).  So, literally the name means “with us God”.  This seems pretty straight forward, but let’s look at a couple of other examples of words, or names, with “el” in them.  Elijah means “my God Yahweh”, Daniel means “my judge God”, and Michael means “who like God”.  We don’t rendered any of these names in this way, instead we put it into a present tense saying “Yahweh is my God”, “God is my judge”, and “who is like God”.  In the same way, Immanuel is “God with us”, it’s a phrase, a statement, it doesn’t mean the individual himself would be Yahweh, the Creator.  This fits in with what we discussed previously, Yeshua was an image of the Father, but not the Father Himself.

The Everlasting (or Eternal) Father
Isaiah 9:6 tells us that the Messiah will be called the Everlasting Father.  This has often been understood to imply that Yahweh was also His own Messiah, Yeshua.  However, we have found another possible meaning to this understanding.  To begin with, the word for “father” here also carries with it the meaning of a founder, or the one who started something, was its “father”.  This fits into the Hebraic understanding as well, such as a father of the faith, or even of a people.   Secondly, the word for “everlasting” also means of a future time period without end, a coming age.  At the time he was called this, he was not yet born, so it must relate to a future age, a future time period.  As the Messiah was to be born in the future, sit on the throne of David forever as the King of Kings, and He is the High Priest in the Heaven for all time, he truly is the Eternal Father.  He was the First Fruits, the Firstborn, the Head of the body forever.  We can now see how He is Emmanuel and the Everlasting Father, but is He also Mighty God?

Yeshua, the Mighty God
Isaiah 9:6 also calls the coming Messiah, Mighty God, or at least that’s how it is translated, making a proper noun of the word “god”.  However, is this the only way to interpret it?  Is this the most correct?  The Hebrew phrase used here is el gibbor, or god mighty as translated.  When we dig a bit further into the words used, we find “el” also means strong man, or man of power.  Gibbor can mean strength, power, might man.  So what we see is a phrase saying man of power, might.  Even if we want to use “el” as god, it’s possible the phrase may still be rendered as mighty man of god, which the Messiah certainly is.  Yet aside from that we find that anyone who is a child of god is called a god.  Psalm 82:6 has the speaker saying the audience were elohim, a plural form of “el”, saying they were gods, sons of the Most High.  Yeshua referenced this verse in John 10:34 as well in which he verified this truth.  Just because the term “el” is used in Hebrew does not automatically mean it is referencing the Creator, YHWH.  Our Messiah certainly fits the bill as being a mighty Son of God, a man of power.

It’s important to always dig deeper than the surface to find out what the Scripture is saying.  By doing so today, we have found that Yeshua was indeed Emmanuel, everlasting father, and a mighty god, just not necessarily in the way we have typically been taught that He was.

We hope you have enjoyed this brief study; remember, continue to test everything.