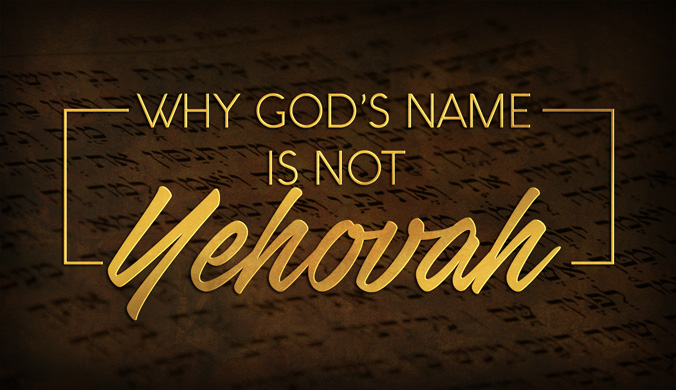 Why God’s Name is Not Yehovah

The pronunciation of God’s four-letter name, יהוה, known as the Tetragrammaton (meaning “four letters”), is a controversial subject in some religious circles. That is because no one knows for sure how to pronounce it, and yet there are no shortage of confident assertions. This article will focus on why one confidently asserted pronunciation—that is, “Yehovah”—is incorrect and based on a misunderstanding of a Jewish scribal custom.

First it’s important to understand that Hebrew was originally written without vowels. When biblical Hebrew was a spoken language, there wasn’t a need for written vowels since those who spoke the language could easily identify the vowel sounds as they read the Hebrew Scriptures. However, by the second half of the first millennium CE, a need for a study aid to preserve the pronunciation of biblical Hebrew had arisen.[1]

The oldest complete manuscript of the Hebrew Scriptures that uses the Tiberian vocalization is the Leningrad Codex, which is dated around 1008 CE. This Codex was corrected against the Aleppo Codex, which is older than the Leningrad by several decades. The Aleppo Codex used to be the oldest complete Hebrew manuscript of the Hebrew Scriptures, but sadly a significant portion of it has been lost to us today.[3]

Where Did The “Yehovah” Pronunciation Come From?

In the Aleppo and Leningrad codices, יהוה appears with a variety of different vowel markings. Most of the time it appears with only two vowels, whether that be sheva-qamets (יְהוָה) or sheva-chiriq (יְהוִה). Many other times it appears with three vowels, whether that is sheva-cholem-qamets (יְהֹוָה) or sheva-cholem-chiriq (יְהֹוִה). Other variations appear less frequently, such as chatef segol-cholem-chiriq (יֱהֹוִה), which occurs once,[4] and chatef segol-chiriq (יֱהוִה), which occurs twice.[5]

Among these variations, some have insisted that when יהוה occurs with the three vowels, sheva-cholem-qamets (יְהֹוָה), that these instances give us the actual pronunciation of the Tetragrammaton. Indeed, it is argued that when the Masoretic scribes wrote יְהֹוָה, they were mistakenly revealing the true pronunciation as Yehovah (or Yehowah). This assertion, however, is incorrect. Those three vowels attached to יהוה were not meant to give us the pronunciation of the Sacred Name, but rather to alert the reader to say Adonai (אֲדֹנָי).

When יְהֹוָה appears in the Masoretic text, the Masoretes were using a scribal custom known as ketiv-qere (Aramaic for “what is written/what is said”) by which they would insert the vowels of the word to be read aloud (qere) with the consonants of the written word (ketiv), creating a hybrid form. In the case of the Tetragrammaton, the vowels for the word Adonai were attached to the consonants, יהוה. The vowels were intended to remind the reader to say “Adonai” when they read יהוה. Semitic language scholar, Dr. Michael Brown, explains:

"The name Jehovah is actually based on a mistaken reading of the biblical text by medieval Christian scholars who were educated in the Hebrew language but were not aware of certain Jewish scribal customs. In short, they did not realize that it was a Jewish tradition to write the vowels for the word adonai, “Lord,” with the consonants for the name Yahweh, known as the Tetragrammaton, and they wrongly read this hybrid word as Yehowah, or Jehovah in English. That is to say, the name Jehovah (or Yehowah) did not exist in Israel—despite the popularity of this name in English-speaking Christian circles, and despite religious organizations like Jehovah’s Witnesses.[6]"

This is also the case when the Tetragrammaton is pointed as יְהֹוִה. In these instances, יהוה is pointed for Elohim—that is to say, the scribes intended the reader to say “Elohim” when they encountered the Tetragrammaton with those vowels. While proponents of the “Yehovah” pronunciation do not think the occurrences of יהוה with the vowels sheva-cholem-qamets (יְהֹוָה) are instances of ketiv-qere, they actually do not dispute the fact that when יהוה is pointed as יְהֹוִה that those are in fact instances of ketiv-qere. This of course begs the question: Why should we think that יְהֹוָה is the actual spelling of the Tetragrammaton while everyone agrees that יְהֹוִה is pointed for Elohim?

It can be proven that the three vowels, sheva-cholem-qamets, attached to יהוה in the Masoretic text are indeed the vowels for Adonai and not the actual vowels for the Tetragrammaton by looking at prepositional prefixes.

This proves that the scribes intended that the reader is to substitute the word Adonai (אֲדֹנָי) for יהוה since the prefixed preposition on אֲדֹנָי takes a patach vowel.[13] Indeed, since the prefixed preposition on יְהֹוָה likewise takes a patach, instead of a chiriq, this confirms that the scribes intended the reader to say “Adonai” when they encountered [14] יְהֹוָה.

Interestingly, when מִן is attached to יְהֹוָה in the Hebrew Scriptures, the chiriq attached to מ is lengthened to a tzerei and the yod does not receive a dagesh.[17] This indicates that the scribes treated the yod in יְהֹוָה as an aleph, the first letter of Adonai, which is a guttural letter. Why? Because they intended the reader to say Adonai when they read the Tetragrammaton.

One argument against יְהֹוָה being a ketiv-qere is this: Unlike other cases of ketiv-qere in Hebrew manuscripts, no scribal note indicates that one should say a different word when they encounter יְהֹוָה. However, Dr. Michael Brown explains why that argument is invalid:

"How then was it that the Christian scholars who began studying Hebrew in the late Middle Ages missed the fact that the Hebrew form yehowah was a combination of the consonants for yahweh and the vowels for adonai? It is very simple. In the case of the divine name yhwh, which occurs roughly 6,800 times in the Hebrew Bible, the scribes did not write the qere form, adonai, in the margins, so the scholars had no idea that they were actually looking at a hybrid form […] It has been a Jewish belief for many centuries that the Lord’s name was too sacred to be pronounced and so, whenever it occurred in the text, Jews would say, “The Lord” (adonai) in its place. This is reflected as far back as the Septuagint, the Greek translation of the Hebrew Scriptures made by Jewish scholars in the third to second centuries b.c., in which the Greek word kurios, “lord,” was substituted for the name yahweh. It may also be reflected in the scribal practice found in the Dead Sea Scrolls in which a different script was used when writing out the consonants y-h-w-h. There was no need, then, for later Jewish scribes to constantly indicate in the margins that yehowah was not the original reading, since this was universally known to all literate Jews.[18]"

In short, long before the Masoretes developed the vowel pointing system in the Middle Ages, Jewish tradition already had a prohibition against saying the Sacred Name. In addition to the name occurring roughly 6,800 times in the Hebrew Scriptures, that is the reason the scribes didn’t see the need to connect a scribal note to the Tetragrammaton. This phenomenon is known as a “perpetual ketiv-qere,” whereby some words are always read differently than how they are written. Professor Emanuel Tov, Ph.D, writes:

"The “constant Qere” (Qere Perpetuum) is not indicated explicitly with a Masoretic note, but in these cases the Ketib is vocalized with the vowels of the Qere.[19]"

The Tetragrammaton is not the only perpetual ketiv-qere in the Hebrew Scriptures. Messianic scholar and theologian, Tim Hegg, gives some other examples:

"In some cases, the Masoretes prescribed a “perpetual Ketiv/Qere,” meaning that some written words are always read differently. These “perpetual Ketiv/Qere” include the proper name “Jerusalem” (written יְרוּשָׁלַםִ but read יְרוּשָׁלַיִם), the proper name “Issachar” (written יִשָּׂשכָר but read יִשָּׂכָר), the 3rd feminine singular pronoun “she” (written הִוא but read הִיא), and the Tetragrammaton. These are not marked with a circule nor have a marginal note.[20]"

As we can see, there is a simple explanation for why the Tetragrammaton does not appear with a scribal note. The reason is that it is a perpetual ketiv-qere. The vowels attached to יהוה in the Hebrew Scriptures are always the vowels of one of the words to be substituted—namely Adonai or Elohim.

"The use of the single sheva in the form יְהוָה came about on the principles of Hebrew phonology. The chataf patach is used to replace a vocal sheva (שְוָה נָח) whenever it would occur with a guttural. Thus, “Adonai,” which begins with a guttural, has the chataf patach (אֲדֹנָי). When, however, the vowels of Adonai were put on YHVH, since the first letter is a yod, which is not a guttural, it would have been technically incorrect to place a chataf patach there. The simple sheva was used, therefore, which conformed to Masoretic phonological rules.[21]"

Moreover, proponents of the “Yehovah” pronunciation do not apply this argument consistently. For instance, why can’t a chatef patach be reduced to a sheva while a chatef segol can? Hebrew teacher, Jason Hare, explains:

"The letter yod does not naturally hold a chataf vowel. Therefore, the chataf patach is written as a sheva […] This should be clear since we all agree that אֲדֹנָי יְהֹוִה has אֱלֹהִים elohim as the qere for יהוה. If the chataf segol can be reduced to the sheva here (יְ < אֱ though some manuscripts have יֱ), then the same is the case for אֲדֹנָי. To argue that יְהֹוָה does not carry the vowels of אֲדֹנָי would be the same as arguing that יְהֹוִה does not carry the vowels of אֱלֹהִים, but we all agree that it does.[22]"

In conclusion, proponents of the “Yehovah” pronunciation are wrong when they assert that יְהֹוָה is the actual spelling of the Sacred Name. This is a hybrid form made from the consonants, יהוה, with the vowels of Adonai. This is because the Masoretes intended the reader to say “Adonai” when they encountered יְהֹוָה in the Hebrew text. This is proven when we look at prepositional prefixes attached to the Tetragrammaton.

That being said, while there is value in studying this topic, some Jews, Messianics, and Christians have become overly obsessed and divisive about it. We should care about truth and we can strongly hold to our views—and clearly we do! But the fact of the matter is that nobody today knows for sure how to pronounce the Sacred Name. So why do we divide over such an unclear issue? However you might choose to vocalize יהוה—or if you choose not to vocalize it at all!—we don’t sanctify His Name by having the most accurate pronunciation. We sanctify His Name by how we live our lives in love and service to God and one another. That means not dividing over pronunciations, even if we believe we have the right one.

Thank you for considering this short written presentation on just one of the challenges specific to the Yehovah pronunciation. If this subject continues to interest you, a more complete presentation exists in our HaShem series, including more on Yehovah.

For your convenience, click on the link below:
HaShem Part 1: What's In A Name

[6] Dr. Michael Brown, “Do Jews refer to God by the name of Jehovah?” 60 Questions Christians Ask About Jewish Beliefs and Practices.

[13] See Psalm 22:30 and Malachai 1:14 for examples where ל is prefixed to Adonai to spell לַאדֹנָי. The aleph combines with the patach attached to the preposition.

[18] Dr. Michael Brown, “Do Jews refer to God by the name of Jehovah?” 60 Questions Christians Ask About Jewish Beliefs and Practices. 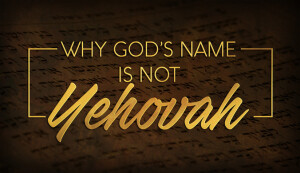 Why God’s Name is Not Yehovah 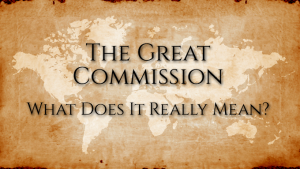 The Great Commission - What Does It Really Mean? 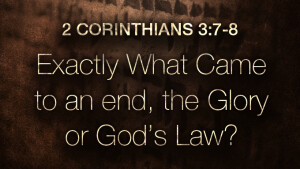