February 20, 2014
in Faith, Salvation, Testing Everything, Law of God 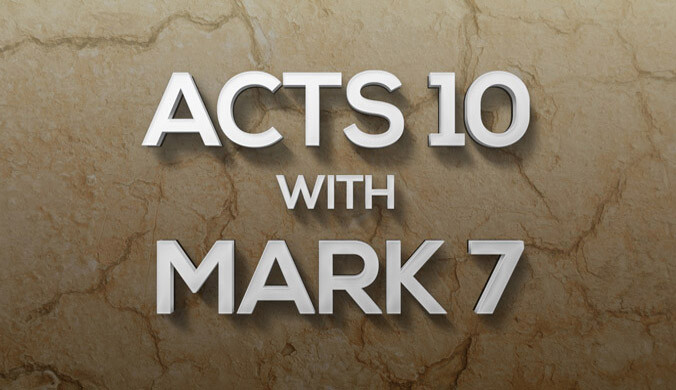 Acts 10:1-22 is Peter’s vision where God tells Peter to kill and eat all manner of clean and unclean animals...This is often interpreted as meaning that God made all things food and clean to eat.

However, this is not the case as Peter explained the vision a little further down in verse 28:

28 And he said to them, “You yourselves know how unlawful it is for a man who is a Jew to associate with a foreigner or to visit him; and yet God has shown me that I should not call any man unholy or unclean.

God was showing Peter that no man should be called unholy or unclean!  In the time, as Peter explained, Jews weren't to associate with foreigners/Gentiles...so God showed Peter that vision, then had a Gentile summon Peter to his house!  It all makes sense!  The context isn't about what is food and what is not, it's about men and associations.  I’d like to go a step further and point to Acts 11 where Peter is actually telling this same story to the other disciples.  He tells them all about the dream and even how he said that he would not eat anything unclean (Acts 11:8).  Verse 12 shows how the Spirit then told Peter to go with the men without misgivings.  This is because God had just shown Peter in the vision that it’s okay to go with the men even if they weren’t Jewish.  It was man’s tradition for the Jews and Gentiles not to associate; it wasn’t God’s idea.  The same principle is being addressed in Mark 7; however, linking it with Mark 7:19 to say the dietary laws have been fulfilled isn't quite accurate either

If we go back to the beginning of Mark 7 we see that the Pharisees had a problem with the disciples eating food (note this is food as defined by God, not just whatever they wanted, the Jewish Pharisees considered it food) without washing the ceremonial washing of the hands.  According to the Oral Laws/Traditions of men, this made them and the food, unclean (Mark 7:2-5).  Christ then quotes Isaiah and gets on to the Pharisees saying they are nullifying the Word of God by the traditions of men (Mark 7:6-8 specifically but also includes through verse 13).   Then the Scripture says that Christ called everyone back to him and made the statement the article quotes, verse 19.  Verse 15 says that it’s not what goes into a man that defiles him/makes him unclean, and verse 19 reiterated this statement.  To begin with, the context is still from just above where the disciples hadn’t followed Jewish tradition to wash their hands first, it’s not about making all things clean or unclean.  To the Jewish people things like pork, fish without fins and scales, rabbit, etc are not considered food, so Christ would not have considered them food either.  All food is clean, the definition of what food is was already known and understood from Leviticus 11.  Nowhere is everything else that is not food, now considered food.

Christ cannot break, change, add to, or subtract from the laws that God had already set up, that would be sinning.  Since Christ did not sin, he could not have changed the dietary laws.  Does this make sense?

As a side note Christ is talking/teaching in Mark 7, yet in Acts, Peter still is aware that the dietary laws are in effect, he, and the rest of the disciples were still following God’s laws; Acts 11 showed us this.  Note that Acts 11:18 states that once Peter explained things (not mentioning that he could not eat all food), the other Jewish disciples no longer had an issue.  The point of the events in Acts seem to be about salvation for everyone; it’s not about a change in the dietary laws.

God’s laws apply to everyone, not just the Jews, Numbers 15:15.   Does all of this make sense?  Did I just ramble on and confuse you? LOL I hate for my words to get in the way of what the bible says; I’m not always as articulate as I’d like to be.  Have a great one!  That was a good article, I just disagree with the food application of Christ saying that all things are now food since that would change the Word of God and he’s the same yesterday, today, and forever.